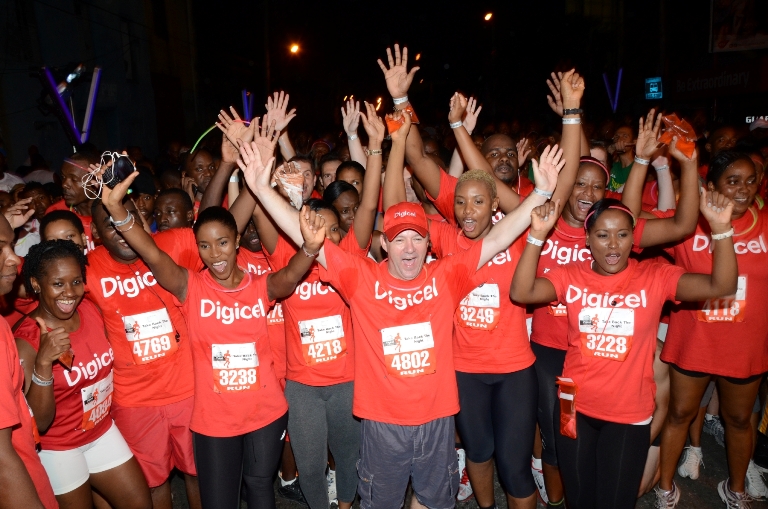 Holding true to its mission to serve, protect and reassure the people of Jamaica, the Jamaica Constabulary Force (JCF) was in full form at the inaugural Digicel Foundation’s 5K Night Run/Walk last Saturday with over 60 police officers and a strong presence of senior officers on the ground to aid. JCF played a critical role in the safe execution of the successful event from start to finish. Samantha Chantrelle, Executive Director of the Digicel Foundation, expressed that, “We are overwhelmed by the support for Saturday Night and want to thank the JCF and the Guardsman Group for assisting to ensure that the security of all participants along all the routes and spectators were at the forefront. This was evident in the Police confirming that there were indeed no reported incidents; a testament that in deed through the assistance of all our partners we did ‘take back the night’ in aid of the special needs community”. The streets of Downtown Kingston came alive with over 5200 participants and about 2000 spectators attending the Digicel Foundation’s Night 5K Run/Walk, which according to SSP Lewis from the JCF’s Traffic Division was very successful. “The Digicel Foundation’s 5K Night Run/Walk was a tremendous success and it was a success more so because it was a night event -  there were a lot of concerns about the event being hosted at night and in downtown Kingston. Not one incident was reported as it relates to theft or robbery and an event of that magnitude usually at least one or two cars stolen or persons being robbed, this is phenomenal. Digicel Foundation, Running Events Limited and all stakeholders of this event including the JCF must be commended for the smooth management of this event”, said SSP Lewis. Commenting on the impact that the Digicel 5K walk/run will have on the perception of downtown Kingston, Lewis added that, “For me a clear indication that persons were comfortable and enjoying themselves where after midnight a team and I were patrolling Ocean Blvd and we saw persons hanging around, persons you would not normally see in downtown Kingston, definitely at night. And according to feedback from many of the officers on the ground, Digicel has indeed set the pace for future night events in the downtown Kingston area.” All proceeds from the Digicel Foundation 5K Night Run/Walk will go to support the continued growth and development of eight of Jamaica’s Special Needs schools and associations. These are: the Jamaica Association for the Deaf, Jamaica Society for the Blind, Jamaica Autism Support Association (JASA), Jamaica Association on Intellectual Disabilities (JAID), the STEP Centre (School for Therapy Education and Parenting of children with multiple disabilities), NAZ Children’s Centre (Montego Bay), Randolph Lopez School of Hope, and the Mustard Seed Communities.