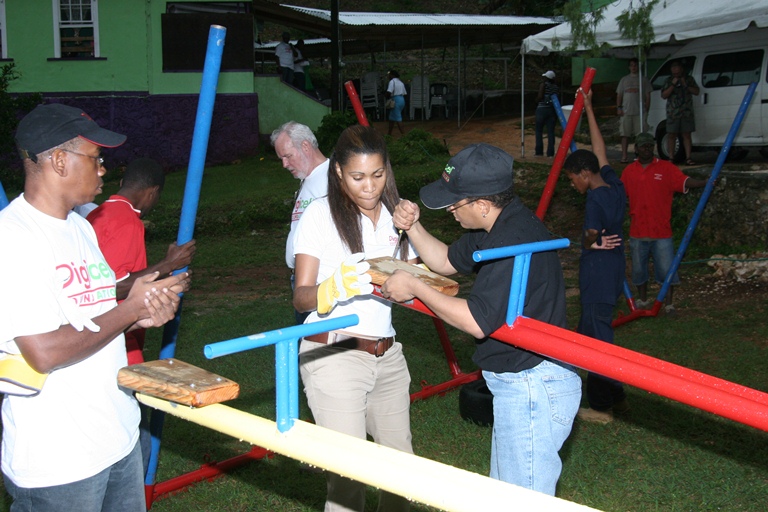 October 14, 2005 – Claremont, St.Ann, Jamaica The non-profit organization, Digicel Foundation has taken another bold step in enhancing early childhood education facilities across the island. The Foundation has expanded and improved the infrastructure at the Faith Christian Fellowship Basic School in Claremont, St. Ann and has installed recreational equipment for the students. The new and improved facilities were presented to the school community this afternoon (Friday, October 14), during an Official Handing-Over Ceremony. "The teachers and students were seriously inconvenienced whenever it rained, because there was no corridor linking the classrooms to the main school building. We at Digicel Foundation have now alleviated that problem by putting in place a covered corridor," said Major General Robert Neish, Executive Director of the Digicel Foundation. The work by the Digicel Foundation at that institution was in response to an application sent to it by the staff. Noting that the infrastructural improvements undertaken at Faith Fellowship Basic School by Digicel Foundation began in August this year and climaxed today, Major General Neish added, "We have financed the erection of a perimeter fence for the school, as well as re-roofed and tiled the sanitary facilities . Today we created an outdoor play-area for the children and erected recreational equipment." The Executive Director is pleased with the strong support that the Foundation, Digicel staff members and Digicel Dealer staff employees have given to the project. "Earlier today we had a work-day where dozens of persons traveled from far, from our parent company Digicel, its Dealerships and the Foundation and came to the school to participate directly in completing the work undertaken by the Foundation," stated General Neish. "The work day was a success despite the fact that to get the work done, we had to brave the torrential rains that prevailed during much of today." General Neish emphasized that the support given to today's activities and the other upgrading work at the school, "is an indication that Digicel Foundation and Digicel are excited about creating a brighter future for the children of Jamaica." General Neish pointed out that owing to the "efficient school management team" at Faith Christian Fellowship Basic School , the project was completed within budget and on time. The school community has welcomed the improvement. Ingrid Wright, President of the PTA, who has two children attending that institution said the parents and teachers have for a long time been concerned about the dangers posed by the absence of a perimeter fence. "Previously, intruders could walk unto the compound at anytime. Another danger was the fact that to retrieve a ball while playing, the children may run out into the road. The fencing was badly needed and we appreciate it a lot," remarked Mrs. Wright. An elated Carlene Jackson, School Administrator, is delighted that Faith Christian Fellowship Basic School will no longer have to battle with the protracted problems associated with inclement weather. "The situation was so bad that we had to put tarpaulin over the roof to try and stop the leaks. Thanks to Digicel Foundation, we no longer have leaking bathrooms," she said. According to Mrs. Jackson, "since there was no covered walkway, when it rained we had a hard time carrying the children from their classrooms, to the bathroom as well as transporting lunch to the classrooms from the kitchen. With Digicel Foundation's intervention, all that has changed." Digicel Foundation was established by Digicel in 2004, to improve the quality of life in communities across Jamaica by supporting community based and driven activities. The organization's first initiative was a commitment of J$200million to the Jamaica National Recovery Fund for Hurricane Ivan recovery measures. Several hospitals, the fishing industry and in excess of 200 educational institutions were assisted through the Foundation's Hurricane Ivan rehabilitation financing which was channeled through the Office of National Reconstruction(ONR). The early childhood education sector benefited from the first community project of the Digicel Foundation , which saw the rebuilding of the Lakes Pen Basic School in St. Catherine in a record time of 6-weeks. Other educational ventures spearheaded by the Foundation include: • The establishment of a Chair in Telecommunications Policy and Management at the University of the West Indies. • J$5Million commitment to the construction of the UWI Lion's Resource Centre For Students With Disabilities. • Donation of books and educational supplies to Mayfield All Age in St. Elizabeth. • Construction and refurbishing of the Guidance Counselling facilities at Ascot Primary School, Greater Portmore, St. Catherine. The primary goal of Digicel Foundation is to make communities more self-reliant by assisting in the creation of educational, social and cultural opportunities. To date, this non-profit organization has presented matching funds of J$6Million to Stella Maris Foundation in St. Andrew to assist in purchasing the building housing its skills training project, donated kitchen fixtures, fittings and other household items to the 'Dare to Care' Home for children with HIV/AIDS, provided recreational facilities for Arnett Gardens in Kingston, and constructed a basketball court for Farm Heights/Rose Heights in St. James.