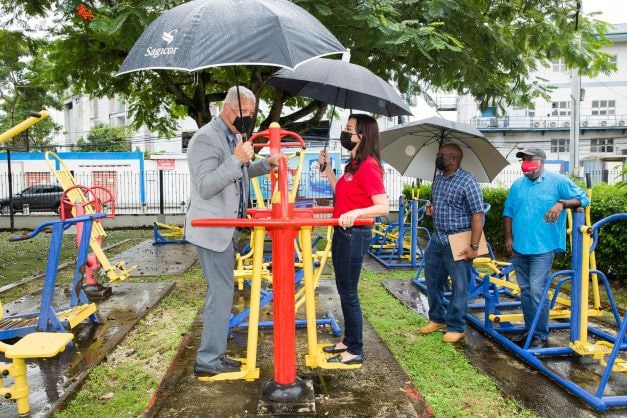 FRIDAY DECEMBER 17, 2021: PORT OF SPAIN, TRINIDAD AND TOBAGO – Digicel Foundation is in it for the long haul with the Nelson Mandela Play Park and Fitness Zone. Back in 2014, the Digicel Foundation added state-of-the-art play park equipment to the public recreational space. On Tuesday 12 December, the Foundation team along with the Mayor of Port of Spain and other officials from the Port of Spain City Corporation, conducted an official walk through at the Park announcing the beginning of Phase I of the much needed upgrades.

The Foundation will be investing TT$80,000 which will go toward the replacement of six pieces of playpark and exercise equipment.  Equipment such as a four-seater swing set, a merry-go-round, a see-saw, air-walker, one rowing machine and a back combo.  The upgrades are expected to be completed within 6-8 weeks from Dec 15.

During the walkthrough, His Worship Joel Martinez shared his vision to transform the city of Port of Spain into a city that honours traditions and legacy but most importantly, one that values family time and recreation.

Echoing similar sentiments, Chairperson of Digicel Trinidad and Tobago and Digicel Foundation Director Sacha Thompson said, “Our community parks play a vital role in the social, economic and physical development of our citizens especially our children.  This partnership with the Mayor and City is more than just us fulfilling a Corporate Social Responsibility. It’s about contributing to the wellbeing of our community in a meaningful way and we are doing it from our hearts. “