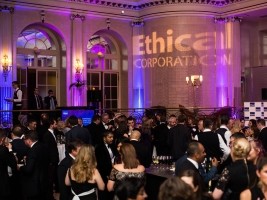 For the second time, the Digicel Foundation receives a prestigious international award given by the Ethical Corporation

Friday, November 10, 2017, Port-au-Prince, Haïti – Last October 16, the Digicel Foundation received a prestigious award at the Ethical Corporation award ceremony held at the Waldorf Hilton Hotel in London, England. The Foundation won the annual award for “International Community Investment” for its contribution to Haiti’s development, primarily for its involvement in the country’s educational system, with the construction of 172 schools and training of almost 2,000 school teachers and principals from throughout the national territory.

Over 200 major global corporations such as Heineken, IBM, and United Airlines were present at this international ceremony that recognized and awarded the leading sustainable and responsible companies from around the world.

Only 20 businesses and organizations received awards for their remarkable projects that demonstrate true leadership through their measurable impact and innovation.

The judges sought particularly to highlight parameters demonstrating a truly innovative and forward-looking approach to their integration into responsible companies.

Commenting on this distinction, Digicel Foundation CEO, Mrs. Sophia Stransky, said, “It’s a great honor for Digicel to be recognized for the work its Foundation is doing in Haiti. We are very happy that we have been able to have a positive impact in Haitian communities for the past 10 years and we look forward to continuing to show our engagement in future years.”

We should note that the Digicel Foundation was previously awarded the Educational Improvement in Haiti award in 2015, for the construction of 150 schools throughout the country and an investment of over $39 million dollars after the January 12, 2020 earthquake.