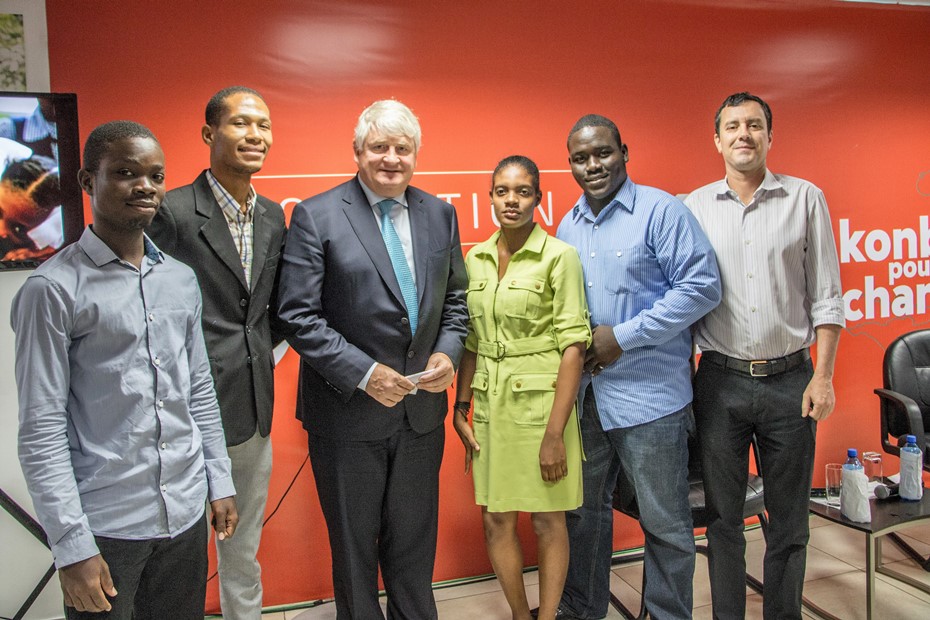 Wednesday, May 24, 2017 - Port-au-Prince, Haïti - This morning, the Digicel Foundation initiated its third commitment for 2017: student grant recipients. All grant recipients are HELPR beneficiaries. The activity is part of a series planned for the next year to continue the celebratory spirit of the tenth anniversary of the Foundation’s support for Haitian society.

This is the background for the meeting that the Digicel Foundation organized with fifty students who are participants in the program. The main speaker was Denis O’Brien, Chairman of the Digicel Group. He answered questions from young people who expressed concerns about how to succeed in a vast and ultra-competitive world. “As Digicel grows, our communities must grow with it. This principle continues to underpin our philosophy of always giving back to our communities in every region. We do so by improving the quality of life of the most vulnerable citizens, by making education accessible to all through technology, by protecting and supporting the victims of domestic violence, and by promoting a spirit of Independence by creating sustainable companies at the community level,” affirmed Mr. O’Brien. The Foundation’s work is not limited to funding social projects. It also seeks to work more closely with communities by sharing personal and professional experiences through one of its main programs, the Digicel staff Commitment program.

The Foundation has been one of the key partners of HELPR since 2009, contributing to its community projects program. The Foundation supports the organization, whose main purpose is to provide excellence study grants to students from low-income backgrounds who excel academically. HELPR grants were initially designed to provide funding for tuition and books. However, its leaders soon realized the need to develop the overall leadership potential of students, their emotional intelligence, and their digital culture via the addition of a series of courses to perfect practical skills.

Today, with assistance from the Digicel Foundation, HELPR uses text messaging to recruit students from across the country. It provides them a complete range of services including study grants, school orientation, housing, internships, language classes, access to libraries and employment services, a computer study and training program, as well as support for the end-of-studies projects of many university students. To date, the organization has received USD50,000 from the Digicel Foundation, contributing to the development and continuation of the various programs.

In parallel, the “Konbit pou chanjman” campaign launched for the Foundation’s tenth anniversary continues to make progress. The campaign seeks to help communities by reducing their vulnerability. The Foundation plans to fund 10 community projects, one per department, proposed by non-profit organizations, in the amount of USD10,000 each. For more information, please see the Foundation website at www.fondationdigicelhaiti.org

In addition, the Digicel Foundation is pleased to announce the opening of its 172nd school in Durissy, in the 12th municipal section of Petit-Goâve, on Tuesday, May 16th. The opening of École Notre Dame du Perpétuel Secours brings the Foundation closer to its goal of building 175 schools in 10 years. This school, originally built by the Foundation in 2007, has now been expanded with the addition of six new classrooms.