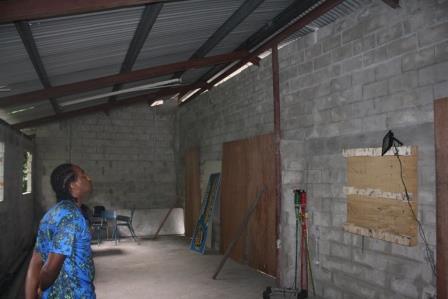 THURSDAY MARCH 8 2018:  Established in 1965 Antillean All Stars, one of the oldest steel-pan orchestra’s in San Fernando, is in the process of developing an after school space in its pan yard for the youth in the community.

The goal of the Management of the orchestra is to further develop the youth from within the community, in academics, musical literacy and practical theory of steel-pan, and other musical instruments.

Through an application to the Digicel Foundation’s Extraordinary Projects Impacting Communities (EPIC) programme, the Management team of the Antillean All Stars orchestra secured a grant for 33,750 TT Dollars to construct the space along with restrooms for the band members.

On February 27, Digicel Foundation’s Operations Manager, Cindyann Currency met with President of the Antillean All Stars Jerod Williams, who showed her the progress made on the space.  With the work underway, the aim is to have the project completed by the end of March and to have the space up and running before the Easter break.

The long-term plans for the area will be two-fold, as the intension is to have the facility also used as a revenue generator for the band and for some of its other social initiatives in which it is involved