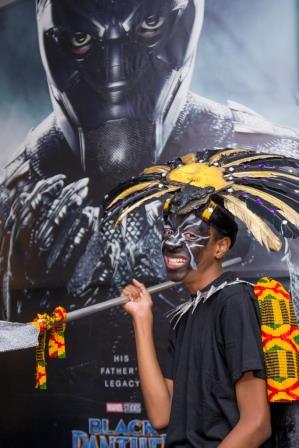 MONDAY MARCH 5 2018:  Excitement filled the air as over 360 students from Servol Special Needs School, Enaamé’s Private School, Each One Teach One, and the Belmont Government Primary School were invited to an extraordinary Monday morning treat at the Digicel IMAX theatre, to view the Marvel block buster film, Black Panther.

Adding to the hype of the event, the students participated in a fun competition where they got an opportunity to show off their creative side. The competition required each school to make an original African inspired head piece.  The participating schools each received the sum of TT$600 from the Digicel Foundation to assist with its construction.

In the end, Servol Special Needs School had the edge and emerged the winner receiving one year free Internet service as its prize.

The special event held on March 5 was made possible through the Digicel Foundation Community Engagement Programme, where over TT$20,000 was invested in this initiative.