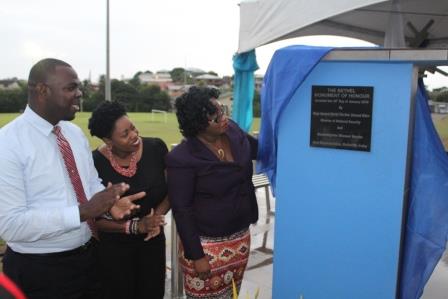 THURSDAY MARCH 1 2018: The unveiling of the Bethel Village Council’s “Monument of Honour” was graced by several dignitaries – Kelvin Charles, Chief Secretary of the Tobago House of Assembly, Ms. Florette Clarke, Deputy Permanent Secretary in the Ministry of National Security, the Minister of Tourism, the Honourable Ms. Shamfa Cudjoe, and Assemblyman Shomari Hector.

The event took place in Bethel, Montgomery, Tobago on Tuesday January 30 at which over 50 persons were honoured, each receiving a miniature award and their names permanently engraved in the Community Monument of Honour.

The monument which honoured persons in the community, past and present, for their contribution toward culture and the development of Bethel, celebrated such categories as Cultural Excellence, Outstanding Academic Achievement, Outstanding Performance in Sport, Exemplary Educators and Distinguished Service in Health and Medicine.  Also recognised were Prominent Business People, Persons who provided Dedicated Service to the Community, Persons who achieved Important Firsts and those who provided Dedicated Political Service.

Digicel Foundation Operations Manager, Cindyann Currency attended the community launch to bring greetings on behalf of the Foundation stating that “Initiatives such as these, that aim to applaud the work of those who have built-up a community, is a ‘bright beacon’ to not only this community, but the country as a whole”.

The Foundation provided $119,000 in funding to the Village Council to complete the monument and to outfit the Administrative Office at the Community Centre.  The office will be used for mediation and counselling services for residents.