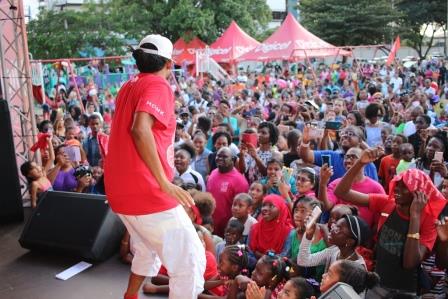 FRIDAY FEBRUARY 2 2018:  The Carnival pump was on last Saturday, January 27 but this time the little ones were the focus. Specifically catering for persons with special needs, the annual Digicel Foundation Kiddie Pump was a huge success for the 4th consecutive year, with well over 800 children plus their parents, guardians and other patrons in attendance.

However, the major highlight of the afternoon was soca super star, Machel Montano, Digicel Brand Ambassador, who had the fans going wild with his performance.  In getting up close and personal, Montano invited a few children up on stage to perform with him, making the event even extra special.

This year’s line-up of performances also included the Goodwill Industries Carnival Dancers and Drummers.  Popular artistes such as Jadel, Krystal Kane, Stef Kalloo and Abdiel Matamora, one of the finalists in the Digicel Machel Montano Music Academy also added their exciting performances to the occasion.

In delivering her address to open what has now become  one of the most anticipated events for children on the Carnival calendar, Digicel Foundation Chairman Desha Clifford stated, ‘This is one of the events that we look forward to each year. It’s important that we take a more deliberate approach to integrate persons with special needs in every aspect of our life –Carnival is one of the best times to demonstrate this.”

Patrons took time out and enjoyed the many interactive games available which included e-games, tic-tac-toe, red light, green light, a magic show which delighted the crowd and a favourite with the children, the ever popular bouncy castle.

Delicious treats were in abundance and mascots Pepper Pig and Mr. Big Foot were there to mingle with the large crowd. Patrons also had the opportunity to capture their special moments at the Hot Shot Photo Booth.

Digicel Foundation continues to advocate for inclusion for persons with special needs, and hosting events such as the Kiddie Pump is one of the tangible ways towards achieving this objective.