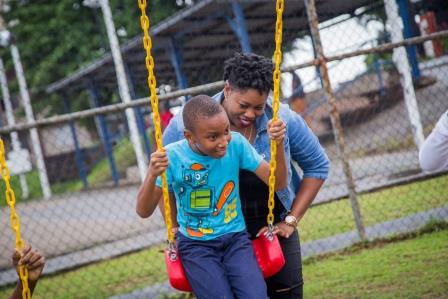 MONDAY, JANUARY 15 2018: The Embacadere Community turned out in their numbers to the unveiling of their Community Play Park on Friday January 12.  In 2017 the Embacadere Development Foundation (EDF) applied to the Digicel Foundation for assistance under the EPIC Initiative to implement an outdoor space for the community.

At the unveiling, the Chairman of the EDF thanked and praised the Digicel Foundation for its EPIC initiative stating that “This playpark is well deserved and is a blessing to the Embacadere Community and to San Fernando.”

In responding, Digicel Foundation Operations Manager, Cindyann Currency advised the community that “Digicel’s Chairman Denis O’Brien is known for saying that wherever Digicel grows, the communities around the company must grow as well.”   She went on to state that “Digicel is therefore very proud of the partnership which the company has developed with the Emabacadere community which was formed even before Digicel launched its C3 experience store in San Fernando.”  She further stated that “This partnership sets the tone for even more involvement by Digicel in the city.”