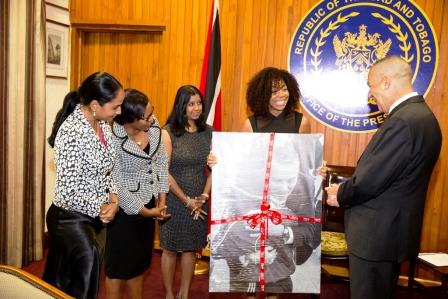 MONDAY 18 DECEMBER 2017:   His Excellency, Anthony Carmona, President of the Republic of Trinidad and Tobago, was recently recognised by the Digicel Foundation, for his unwavering support and advocacy for societal inclusion for those with the special needs.

The President’s contribution to raising awareness on the causes associated with persons with special needs was acknowledged when executives from the Digicel Foundation visited the Office of the President, St. Ann’s, to present him with a photo taken of him at the last Special Olympics National Games.

During the visit, His Excellency related to the guests that he practically grew up at Lady Hochoy Home in Cocorite - which caters for those with intellectual and physical disabilities - as his aunt, the late Sister Antoinette Dickie was the Head Caregiver at the Home. He said it was there that he developed an appreciation for the work related to persons with special needs and a love for those with special needs.

On making her presentation to the President, Penny Gomez, CEO of the Digicel Foundation, said “We specifically selected this photo because it captures your genuine emotions as it relates to persons with disabilities and it is one that we cherish.”

His Excellency in turn commended the Digicel Foundation for their tireless work with persons with special needs and for, “being the voice of persons with disabilities”.

The Digicel Foundation and the SOTT has had a long standing relationship collaborating on numerous projects and programmes, which advocates for the inclusion of persons with special needs and ensures that every opportunity that presents itself in areas of growth and development, that members of this community are part of it.

Some of the many programmes include: Preparing You!  - A Disaster Preparedness and Emergency Evacuation Programme, Therapy Based Education, Puberty Sex and Sexuality, Just Like You, Play Unified, Sports Development Programme and SoFit.