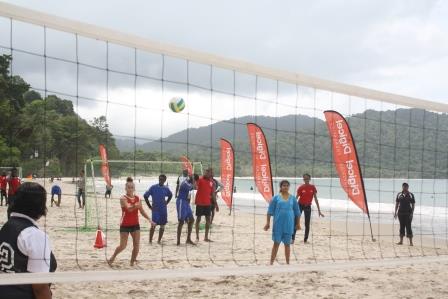 MONDAY OCTOBER 30 2017:   A spirit of camaraderie, fun and a competitive atmosphere was evident at the Special Olympics of Trinidad and Tobago (SOTT) seaside games which took place at Las Cuevas Beach.  The annual event which was introduced last year, began at 9:00 am with an Open Water Swim followed by Beach Volleyball, Beach Football and a Run-Swim-Run competition.

This sport initiative which is one of the components of SOTT’s Development Programme, is geared towards the holistic development of athletes.  The Development Programme consists of three major elements – Sports Camp, Community Training Programme and the Norma James Community Caravan. The Digicel Foundation has invested over $200,000 in this programme over the past three years.

The Seaside Games is part of the Norma James Community Caravan and is meant to build awareness on Special Olympics, encourage an atmosphere of fair and competitive sport and promote inclusion through the ever present #PlayUnified theme.

In the spirit of inclusion, the Trinidad and Tobago Beach Football Association teamed up against the SOTT National Team to participate in a unified match.

The day’s fun events ended with an award ceremony where medals were distributed to athletes who ranked first to third in the various competitive sports.