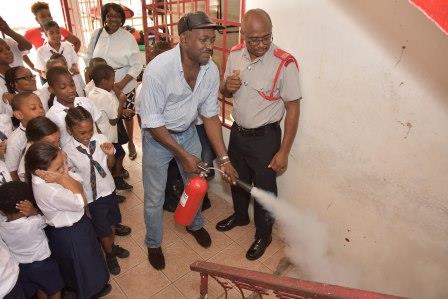 Preparing You! done in collaboration with the Trinidad and Tobago Fire Service (TTFS), seeks to empower persons with special needs to be better equipped to respond, in the event of an emergency. Following the exercise, Mrs. Edris Brizane, Principal of Enaame’s Private School, stated that she was “proud of the students and the confidence they displayed as a result of the training received, especially for undertaking the drill without panicking.” The Fire Officers praised the students for their timely and orderly response to the alarm and were particularly impressed with how the older students assisted the younger ones, during the drill exercise.

As part of the project, the Foundation has outfitted both schools with emergency alarm systems and other safety equipment to facilitate the sustainability of this critical intervention.     To date, the project has been implemented in 8 schools across Trinidad and Tobago. Preparing You! receives partial funding from Australian Agency for International Development (AUSAid)  which is implemented by the Global Environment Facility Small Grants Programme at the United Nations Development Programme.