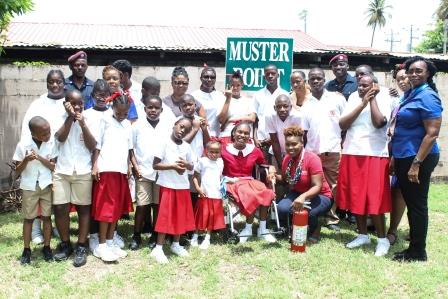 TUESDAY SEPTEMBER 26 2017: The staff and students of the Tobago School for the Deaf, Speech and Language Impaired came in for high praise, from fire officers, when they participated in an emergency evacuation drill carried out at the school recently

The drill was part of the Digicel Foundation’s ongoing Preparing You! Programme that exposes persons with special needs and their caregivers, to the fundamentals of disaster preparedness and emergency evacuation.

Supervising the evacuation exercise were Fire Sub Officer Lyndon Mark and Firefighter Terron Holder from the Tobago Division of the Trinidad and Tobago Fire Service.  The Officers were impressed by the excellent response time and orderly manner in which the staff and students conducted themselves during the drill.

Highlighting the increased incidence of natural hazards taking place regionally, the Fire Officers took the opportunity to reinforce training in life safety, fire prevention and the use of fire extinguishers.

Mrs. Pantin, Principal of the school noted that she was pleased with the alarm system and the various safety equipment that had been installed at the school thanks to the Digicel Foundation. She also stated that “it is important to carry out these emergency drills from time to time to reinforce the training we received from Tobago Emergency Management Agency (TEMA).”

Currently in its second year, the Programme also receives partial funding from the Australian Agency for International Development (AUSAid) which is implemented by the Global Environment Facility Small Grants Programme at the United Nations Development Programme.

Thus far, eight special needs schools across Trinidad and Tobago have been outfitted with emergency alarm systems and safety equipment as part of the Programme.  In addition to which over 430 students and caregivers have received relevant disaster management training.