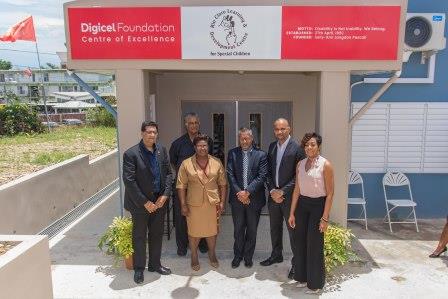 MONDAY, SEPTEMBER 18, 2017:  Founder and Principal of the Rio Claro Learning and Development Centre for Special Children, Mrs. Kellyann Pascall, together with her staff and students, commenced the new school term with a newly built Centre courtesy the Digicel Foundation

The Digicel Foundation invested 1.2 million TT Dollars to rebuild the school which houses 30 children with varying special needs. The upgrades to the Centre included a staff room, therapy room, a kitchenette; separate bathroom facility for the teaching staff, urinals for the boys, a separate office and reception area and an open space for the classroom which is now three times the size it was prior.

The Rio Claro Centre is the latest beneficiary of the Digicel Foundation ‘Centres of Excellence’ transformative programme, which upgrades special needs schools across the country, ensuring that the students are in an environment which meets international standards. This is achieved through minor to major upgrades or a total remodelling to the school’s infrastructure; making it safer and more accommodating.

Speaking at the unveiling ceremony on September 13, Digicel Foundation CEO Penny Gomez thanked the Minister of Agriculture, Land and Fisheries and the Minister of Public Administration and Communication, for their efforts in securing the long term lease for the property. Ms. Gomez stated, “This is a perfect example of public and private sector collaborating on an initiative that lends to the Foundation’s core vision of creating a world where no one gets left behind.”

In praising the Principal of the Centre, Senator the Honourable Clarence Rambharat, Minister of Agriculture, Land and Fisheries spoke of her dedication and resilience throughout the years.

He highlighted the importance of all schools, more so, special needs schools to be safe and well equipped to handle day to day operations and emergency situations.  The Minister also thanked the Digicel Foundation for continuously advocating for inclusion of persons with special needs and working on sustainable development with communities throughout Trinidad and Tobago.

The School’s Principal, Mrs. Pascall, gave an overview of the institution’s 25-year journey. She thanked everyone who contributed to the upkeep, growth and development of the school but especially thanked the Digicel Foundation for hearing the cry of “all special needs organisations”.

The Lady Hochoy School located in Gasparillo is also a beneficiary of the Centres of Excellence programme, its upgrades were completed in July of this year.