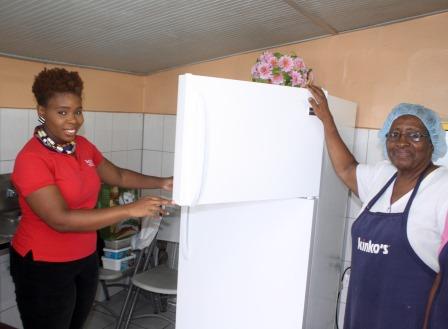 TUESDAY SEPTEMBER 19 2017: Every Monday morning, during the wee hours, a team of volunteers congregate to begin cooking and preparing the Waterfront Relief Centre to welcome homeless persons and any others seeking relief. By sunrise, the Centre is buzzing with activity as visitors join in to have fellowship, share testimonies, a good home cooked meal and even get an opportunity to shower and receive a clean change of clothing.

Anne Marie Hart-Bickram who runs the Centre recalls that she was inspired by a dream in which she saw herself distributing meals to the homeless. Mrs. Bikram-Hart states that the labour of love began 20 years ago, preparing meals at home and distributing throughout San Fernando, but as the crowd grew and we realised that many persons also needed a place to shower and an opportunity to fellowship, we looked into securing a dedicated space.

Thanks to the Digicel Foundation’s Community Engagement Programme, the Waterfront Relief Centre was the recipient of a small grant that provides TT$10, 000 to its beneficiaries. The Centre used the funds to purchase a refrigerator, household items such as fans, mops, buckets and food items.

On receiving the grant, a delighted Mrs. Hart-Bickram and team thanked the Digicel Foundation and all persons who give of their time and finances to keep the Centre going.

Volunteers at the centre noted that the common denominator keeping the momentum is their love of Jesus Christ. Sandra and Makesi Changa noted that most volunteers attend the Revival Time Assembly which also provides the premises from which the centre operates.

Joy Waterman, Secretary of the Relief Centre who oversees the clothing drive noted that “there have been times when persons who don’t understand our calling, attempt to discourage the team from working with the homeless.  However, I believe that God has called upon all of us to serve the community and, as such, we prefer not to judge the actions that may cause anyone to make their home on the streets.”