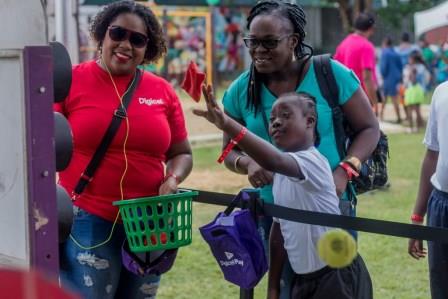 MONDAY SEPTEMBER 18 2017:  Over 700 persons including 200 with special needs turned up recently at the Port of Spain City Corporation Play and Fitness Zone for the first ever Digicel Foundation/TRIBE  Kids Fest, which featured lots of fun activities which included Tug-o-War, Hula Hoop, Dance Off and Dunk the Basket.

Chairman of the Digicel Foundation Garvin Medera commented on the participation at the event saying “The large turnout that I see here today as well as at other events which the Foundation has undertaken, has convinced me that the Foundation is getting closer to its target for an inclusive society in a world where no one gets left behind.”

Joining the fight toward inclusion was TRIBE as they participated and volunteered in the 2pm- 5pm event.  Marketing and Corporate Communications Manager Leah-Marie Guevara expressed her joy and excitement to join forces with the Foundation and host this fun day.  “My team and I anticipated an awesome day but hanging out with the children and participating in the friendly competition has been awe inspiring.  We’re looking forward to next year.”

The Digicel Foundation and TRIBE extend their appreciation to other corporate sponsors – the Port of Spain City Corporation, Cutting Edge Limited, Funnables, Alfonso Sport and Fitness, Johnny Q, Rene Sound and Vision, Tropical Power, Hot Shots Photo Booths and Red Ants Carnival – all of whom contributed to the overwhelming success of the event.