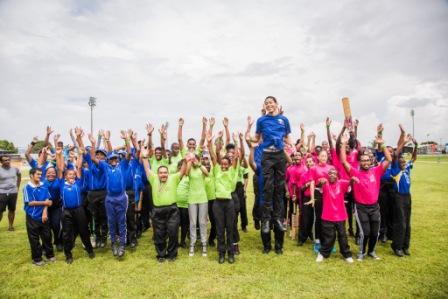 THURSDAY JULY 6 2017:  PORT OF SPAIN, TRINIDAD AND TOBAGO – Intermittent showers did nothing to dampen the spirits or performance of the athletes who turned out for the annual Special Olympics National Cricket Games. Held this past Saturday July 1, the Games took place at Constantine Park in Macoya.

In delivering his official welcome, SOTT Games Chairman, David Benjamin encouraged athletes to give of their best saying “You should be proud of your accomplishments thus far just as those who support you are proud of you.”

The event was supported by long-time partner the Digicel Foundation, whose Project Coordinator Diana Mathura, in addressing the athletes, urged them to “work hard, be safe and have fun!”

After a day of intense but enjoyable competition,the National Centre for Persons with Disabilities emerged victorious with a score of 62 for 6 over last year’s winner Lady Hochoy Penal who obtained 39 for 10.  NCPD previously captured the title at the 2015 National Cricket Games.