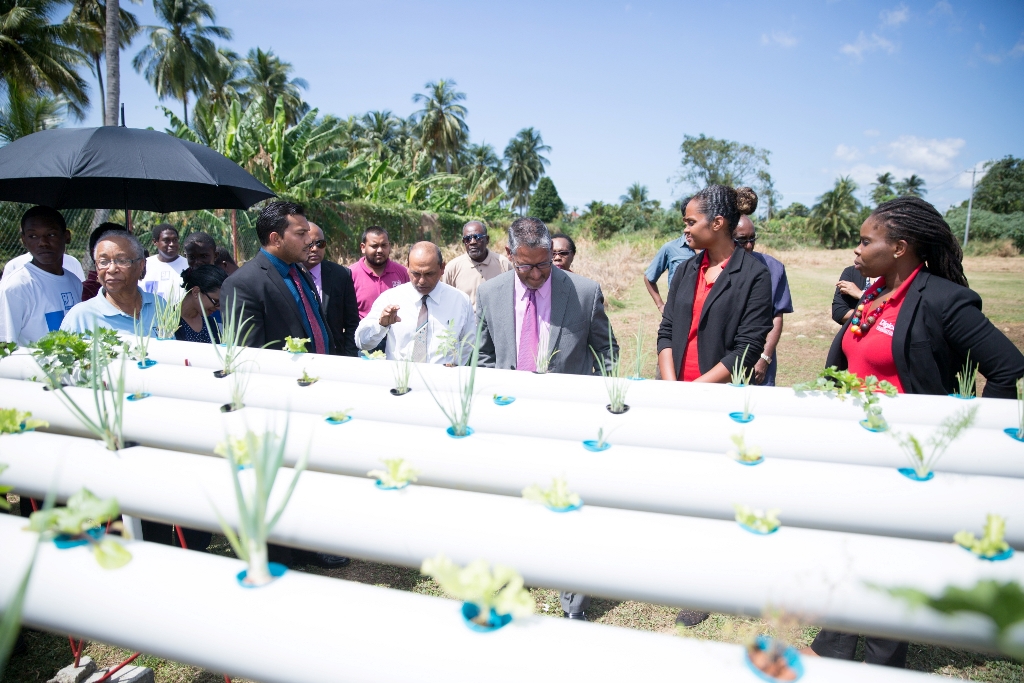 THURSDAY FEBRUARY 23 2017:  PORT OF SPAIN, TRINIDAD AND TOBAGO – Specially invited guests were surprised and delighted to be greeted on Wednesday, February 22 by the drum team of Goodwill Industries. The event was the launch of an Aquaponics Demo Unit housed at the Aquaculture Division of the Ministry of Agriculture, Land and Fisheries.

Part of the Digicel Foundation Aquaponics Programme, the launch event was a collaboration between the Ministry of Agriculture, Land and Fisheries and the Foundation. Aquaponics is a food production system that combines the technology of Aqua-culture - rearing marine animals with Hydroponics - growing plants in water.

In partnership with the Ministry, the Digicel Foundation has implemented fourteen Aquaponics Units, to the tune of US$78,000, at various schools for persons with special needs throughout Trinidad and Tobago. The Demo Unit brings the total number of units to fifteen.

In giving the feature address at the launch, Senator the Honourable Clarence Rambharat, Minister of Agriculture, Land and Fisheries, highlighted the importance of building awareness for the numerous benefits of growing one’s own food and encouraging healthy diets within our nation’s schools. The Minister praised the partnership forged with the Digicel Foundation, noting that he had firsthand witnessed the system at the Rio Claro Learning & Development Centre for Special Children, which is one facility he is passionate about representing and assisting.

Ms. Anjaana Downes, Senior Project Officer, Digicel Foundation in delivering her remarks stated that, “at the Digicel Foundation ‘Inclusion’ is the mantra for the special needs community as the Foundation endeavours towards making Trinidad and Tobago a truly inclusive society.”

Ms. Downes went on to say, “the main objectives of the Aquaponics programme are to expose the students to the therapeutic benefits of the system while also giving the option of alternative income for the school and the students.”

The newly installed Aquaponics Demo Unit is an 18 pipe Nutrient Film Technique (NFT) system which will be available for demonstration purposes to all schools across the country.

At the end of the official proceedings guests were invited to commemorate the unit’s launch by feeding the fish and were also given a tour of the facility.