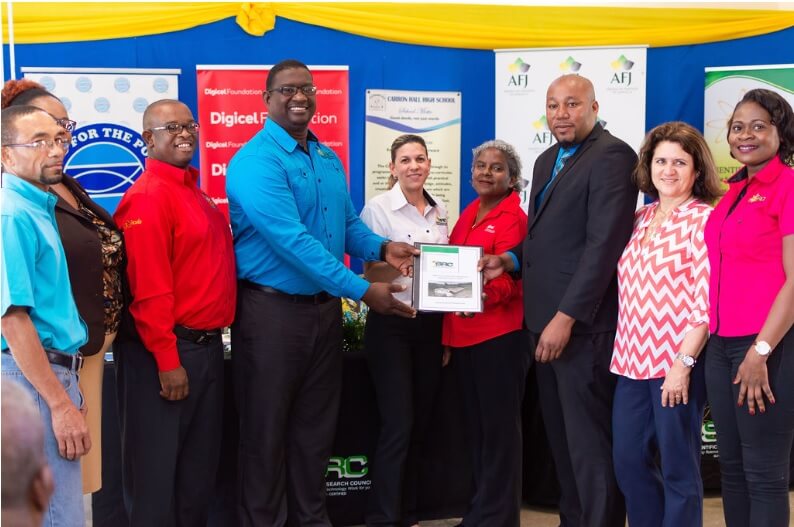 Mr. Johnson is proud to note that the state-of-the-art Environmental Management System, which was officially handed over on Tuesday, February 5, has had a positive impact on the school. The project, which has several integrated components, is the result of an innovative partnership between the Digicel Foundation and the Scientific Research Council (SRC), Carron Hall High School, Food for the Poor Jamaica, American Friends in Jamaica and Caribbean Broilers Limited.

The completed “closed loop” project has three main elements: A piggery housing 30 animals; a biodigester septic tank system that treats the waste, which will produce organic fertilizer and irrigation water; and a crop production site on the school’s farm. The biodigester will also produce energy in the form of biogas, to be used as fuel and electricity generation. The system is expected to generate income for the school and benefit the surrounding community.

“We are delighted to be a partner in this environmentally friendly project,” said Ms. Karlene Dawson, Chief Executive Officer at the Digicel Foundation. “As the leading telecommunications company in the region, this is the kind of venture, combining technology and innovation, that we get excited about. Science, Technology, Engineering, & Mathematics (STEM) in education is also of critical importance to us, so we are particularly pleased that this project will enhance the school’s educational capacity in environmental science, agriculture, biology and construction technology.”

Principal Johnson observed that the project “has created a tremendous boost for our agriculture and science programmes at the school.” Noting that it is already in use as a hands-on tutorial for the students, he added: “There is renewed interest and the number of students interested in agriculture has grown. They can see for themselves how this works, so it has a greater impact.” The project has helped the school integrate science and even non-science subjects under a “green” umbrella. As for the crop production site, he pointed out that the school has already reaped one crop from the land, which is directly connected to the irrigation water from the waste. Combined with the pork production already under way, Mr. Johnson noted, the school of 393 students and the surrounding community in the hills of St. Mary are already benefiting financially.

Coordinator for the SRC’s Science and Technology Education Unit Ms. Amanda McKenzie expressed her appreciation for the partnership. “This system has several benefits – economic, financial, environmental and educational,” she said. “We would like to spearhead more projects such as this that include capacity-building.” She noted the three by-products from the “closed-loop” system: the waste water, which is high in nitrogen, phosphorus and potassium; organic fertilizer, which is rich in nutrients and is applied to the school’s experimental plot; and biogas production, expected to begin in approximately two months’ time. “This will come on stream when enough pressure builds up in the system,” Ms. McKenzie pointed out.

“We are open for people to come from outside to come and visit us, to see how the system works,” enthused Carron Hall’s Principal. “We want to share the joy!”