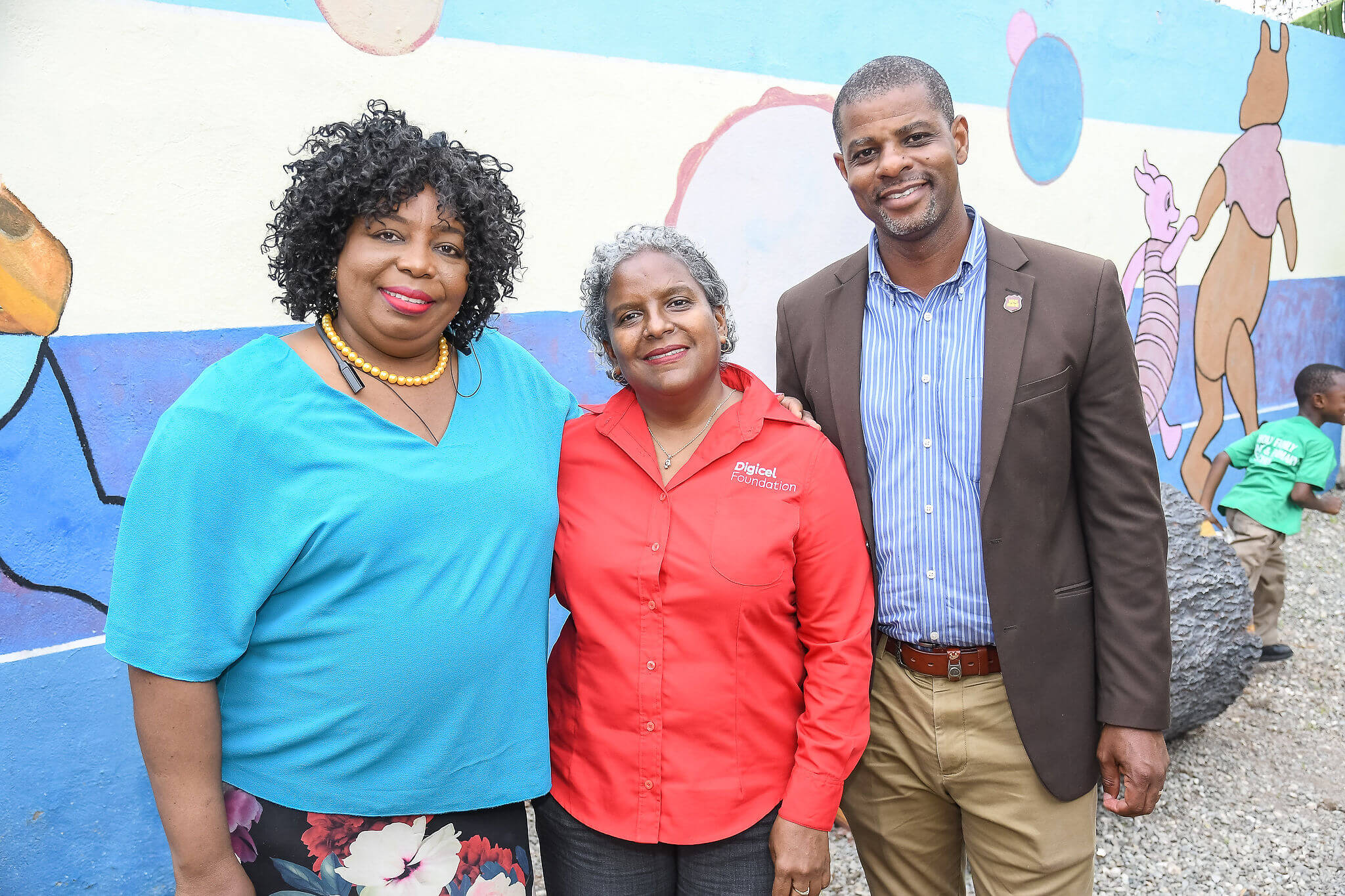 (L-R): Lorna Anderson, Digicel staff member, Karlene Dawson CEO of Digicel Jamaica Foundation, Christopher Wright Principal of the Holy Family Primary and Infant and a student of the Holy Family Infant School were all smiles at the launch of the newly renovated play area.

Kingston, Jamaica – Wednesday, 12 December 2018. Lorna Anderson a warm-hearted woman who works as an Office Attendant at Digicel, had an early Christmas wish become a reality this year!

Ms Lorna, as she is affectionately called, had the vision of a new playground for the Holy Family Infant School on Laws Street, Kingston, and saw the new facilities officially opened for the children on Wednesday, December 12.

This was her brainchild. Ms. Anderson explained that her sister, Mrs. Tanya Stewart, is a teacher at Holy Family Infant.

“She always talks about the kids, and how bright they are,” said Ms. Anderson, “She tells me they have so much potential. The children are learning to write their first letters and learning the alphabet. They are getting on well. But my sister always said they needed a space to play. They learn from playing.”

When she heard about Digicel Foundation’s “Mek-a-Muckle” micro-grants initiative, Ms. Anderson encouraged her sister to apply: “I said to her, ‘Why don’t you sign up for it?’”

The Digicel Foundation’s Mek-a-Muckle micro-grants initiative, which began three years ago, allows Jamaicans to identify and nominate a worthy project for funding, while empowering communities through small projects that will improve quality of life and generate self-sufficiency.

The youngsters and teaching staff at Holy Family Infant School were certainly smiling at the official launch of a brand-new, custom-made playground funded through Mek-a-Muckle. The playground is the work of 360 Recycle Manufacturing, a community-based social enterprise that has benefited from a Queen’s Young Leaders (QYL) award through Digicel Foundation.

At the same event, Digicel Foundation Chairman Jean Lowrie-Chin and CEO of Digicel Justin Morin launched the Foundation’s 2018 Annual Report, providing an overview of its projects, programmes and progress towards its goals. The Report highlights the strong bonds forged through relationships such as those with individuals and stakeholders like Ms. Anderson, who are able to make connections and identify needs. The Mek a Muckle and other micro-grants help to inspire leadership and energize communities.

These partnerships reflect Digicel Foundation’s ongoing and strong ties with past and present recipients of support through programmes like QYL, including social enterprises such as 360 Recycle. Founder and Managing Director Scheed Cole is both a sculptor and engineer. His products are made of recycled plastic bottles and Styrofoam.

He would like the children to understand the environmental meaning behind his work. “The playground includes elements resembling nature,” he said. “There will also be boulders, rocks, a landscape.” Mr. Cole believes that children – especially those in the inner city, where his own business is located – are too disconnected from nature. The playground includes a slide, seesaw, “Jungle Jim” climbing frame and swings.

Coordinator of the Infant Department Mrs. Sandy Muir said the children were really excited. “They have had nowhere to play,” she explained. “We had to monitor them closely.” Her department’s current cohort of 88 students (aged three to five years) was doing well, she noted. Mrs. Muir has been teaching for 21 years, ten of them at the Infant School. She noted that the playground will be well cared for and protected when not in use.

Digicel Foundation Chairman Mrs. Jean Lowrie-Chin expressed her delight at the opening of the playground. “It is now recognized that play is a critical learning tool for children,” she said. “The new play area is such an imaginative creation. It will enhance the students’ cognitive skills while providing fun and good exercise.”

Digicel CEO Justin Morin was impressed by the creations of the social enterprise, noting, “This project is in keeping with Digicel’s commitment to the social development of downtown Kingston, where we built our head office. We at Digicel believe in investing in all the communities where we work.”

“I am so excited, so happy!” said Ms. Lorna Anderson at the realization of her dream.

Application forms for micro-grants up to a maximum of J$250,000 are currently available on the Foundation’s website - www.digiceljamaicafoundation.org- and in over 13 dealer stores across the island, including Digicel's flagship stores in Kingston and St. Andrew.