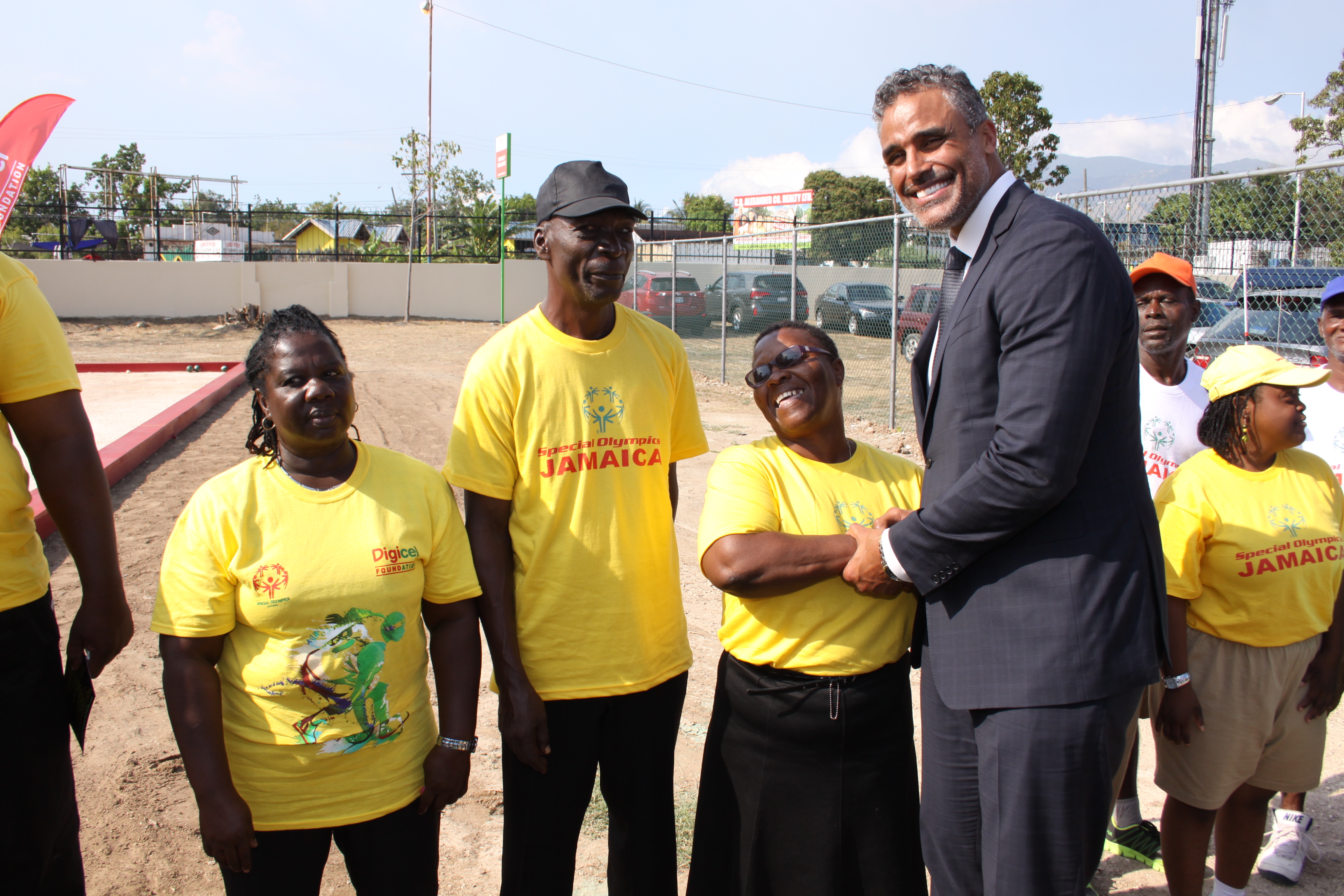 NBA Legend Rick Fox today officially opened a Digicel Jamaica Foundation funded Special Olympics Basketball Court – the first of its kind to be built in Jamaica – at a ceremony held on site at the National Arena.

Fox was joined by Minister without portfolio with responsibility for Sport in the Office of the Prime Minister, Natalie Neita-Headley, members of the Jamaica Special Olympics Community including President, Lorna Bell as well as the Digicel Jamaica Foundation team led by its Chairperson, Jean Lowrie-Chin.

The multi-purpose court and bocce training facility was built thanks to an investment made by the Digicel Foundation, in partnership with the Government of Jamaica, Independence Park Limited, and National Basketball Association.  The new court forms part of the Digicel Foundation’s overall efforts to improve sports development for thousands of people with intellectual disabilities.  Most importantly, the Jamaica Special Olympics team will now have a facility where they can train and prepare for the upcoming 2015 World Summer Special Olympics Games to be held in Los Angeles.

“We are proud of our Special Olympians who continue to forge ahead by breaking down barriers and reminding the world that there is no need to focus on their disabilities, rather it is about focusing on their tremendous abilities and the passion with which they take on the world,” said Minister Natalie Neita Headley.

NBA Cares, the league's global social responsibility program, partnered with the Digicel Foundation to make this court a reality through its donation of equipment and court fixtures such as the basketball hoops and nets.

“We are thrilled to work with the Digicel Foundation and continue the NBA family’s global support of Special Olympics,” Fox said.  “Basketball is a game for people of all ages that promotes inclusion and respect, and we are excited to be part of this amazing new sports training facility for the Jamaica community.”

Executive Director of Special Olympics Jamaica Lorna Bell said, “This court is the best thing to have happened to Special Olympics in Jamaica and with the opening of this new court, our athletes will have a first class training facility that will no doubt improve their skills. It is our mission that through sports, we can change the lives of people with intellectual disabilities and thanks to the Digicel Foundation and the NBA Cares programme, we are now able to make this possible.”

Digicel Foundation Chairperson Jean Lowrie-Chin said, “Digicel has long celebrated the extraordinary achievements of Special Olympics athletes. Since 2004, Digicel has been the largest sponsor of Special Olympics in the region and in Jamaica, we have shown our support of the Special Olympics team here, which has seen them being able to attend international games and also have the best equipment with which to train.

She continued, “Over the last two years, the Digicel Jamaica Foundation has invested over JM$200 million towards the development of special needs as we believe everyone has something to contribute to national development including those with special needs and our beloved Special Olympics athletes.”

On 5th June, the Court will host its first official event – the annual Special Olympics National Summer Games which will see hundreds of Special Olympics Athletes from across Jamaica showcasing their skills.