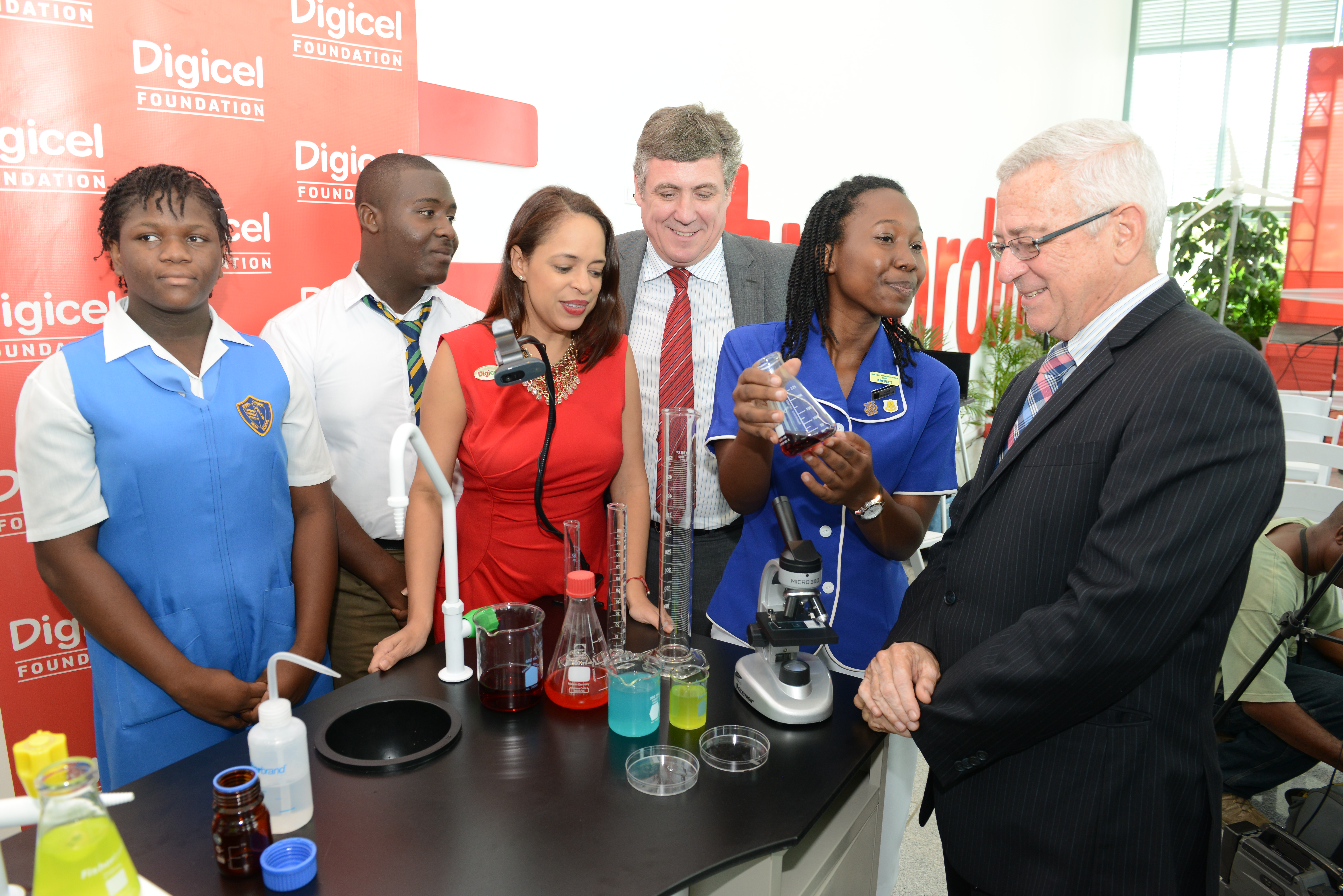 Fifty secondary schools across the island will be benefitting from state-of-the-art Mobile Science Laboratories as part of a commitment made by the Digicel Foundation in partnership with the Clinton Global Initiative (CGI) to improve science education in schools. A first for Jamaican schools, the Mobile Science Laboratories were launched under the ‘Innovation in Science Education’ project and consists of scientific equipment housed in portable cabinets that can be moved from classroom-to-classroom. The labs are also equipped with ten tablets and a mobile interactive white board for added connectivity through the use of information and communication technology (ICT). The US$ 1 million project will prioritize more vulnerable populations such as those in urban, deep rural and some schools at the secondary level, and will benefit around 20,000 children. Addressing the audience at the launch of the project held at Digicel’s Headquarters on Thursday, September 25, Minister of Education the Hon. Reverend Ronald Thwaites believes this project will generate immense interest in science and ICT among students. The mobile labs, designed by Industrial Technical Supplies with the insight of the Ministry of Education, are aimed at addressing recurring challenges of space, resources and technology in the education sector. Additionally as part of the project the Digicel Foundation will create renewable energy solutions in 15 schools which will impact the operational costs associated in running and maintaining those institutions. According to the Minister, the project will also save some of the over a billion dollars per year in electricity costs in schools. He said, “The ministry commends the Digicel Foundation in their continued contribution to education. They are leading us in this arena and we are happy to be led. Can you imagine what funds saved from this investment can be used in the further enrichment of our children’s education?” This investment is part of an overall commitment made by the Digicel Foundation to CGI which will see it carrying out transformative projects with an investment of over US$13 million in Haiti, Jamaica and Papua New Guinea which together, will benefit over two million people. Established in 2005 by Former United States President Bill Clinton, CGI convenes global leaders to create and implement innovative solutions to the world's most pressing challenges. Digicel Foundation patron Denis O’Brien said; “Each of our Foundations is mandated to meet the severest challenges in their respective communities head on by executing programmes that give back to those communities and help to effect positive change. We are delighted to be making these new commitments to the CGI and would like to thank President Clinton for his tireless efforts to turn great ideas into tangible positive outcomes for communities across the world.” In welcoming the new commitments from the Digicel Foundation, President William Jefferson Clinton, commented; “Through the diverse partnerships the Digicel Foundation has forged, it has demonstrated the power of creative co-operation. I commend Denis and his team for giving so generously of their time and energy and I look forward to continuing our work together in the years to come."