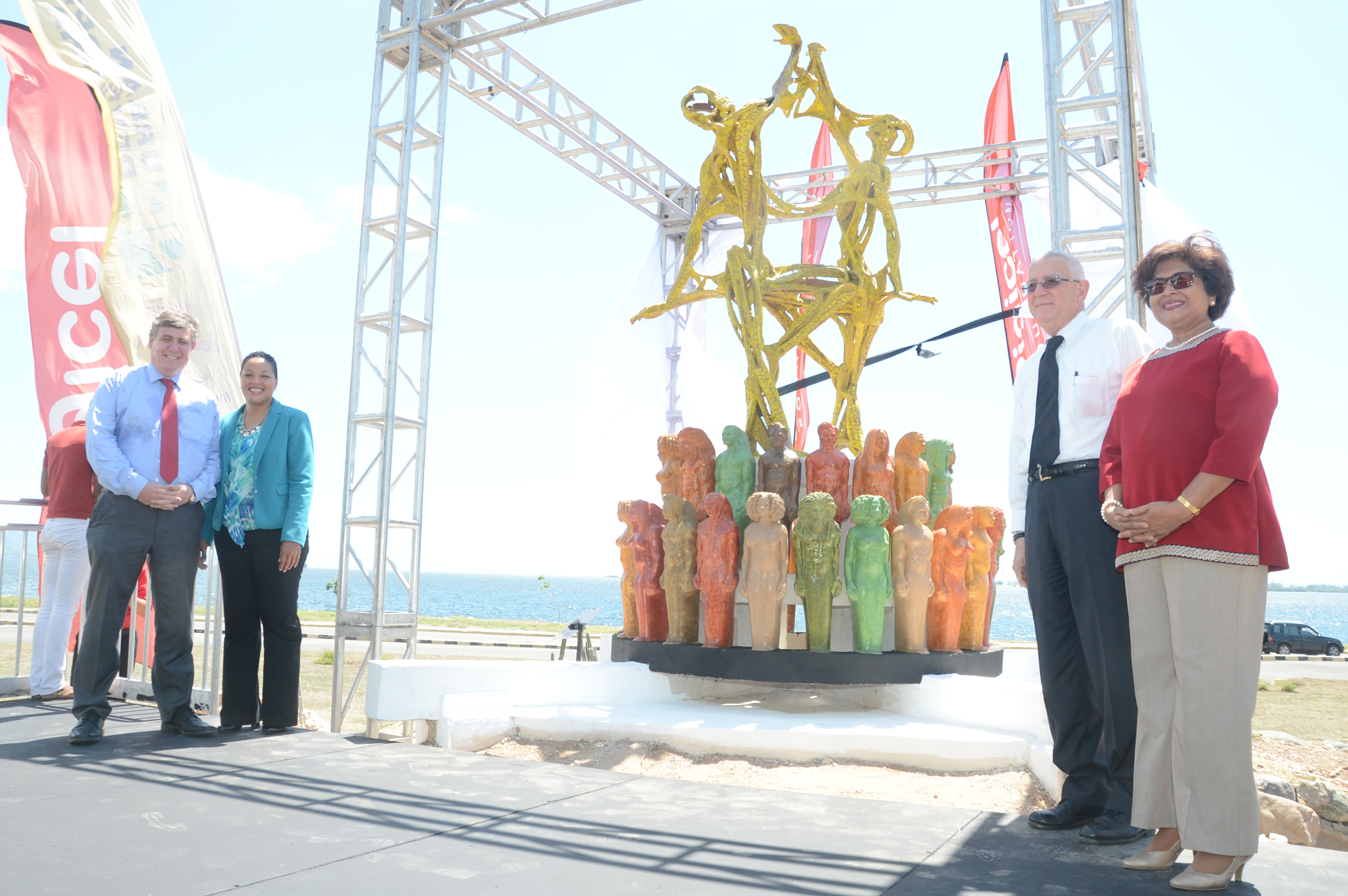 Digicel Foundation showcased its continued commitment to the redevelopment of Downtown Kingston with the unveiling of a new monument at the Breezy Castle Roundabout on Thursday, October 2, 2014. Digicel Jamaica relocated its headquarters to the downtown area in 2012 and since then, has partnered with the Urban Development Corporation (UDC) and the Kingston and St Andrew Corporation (KSAC) to complete several successful projects, including the Coronation Market and Redemption Arcade renovations. The monument, entitled “Evolution” was unveiled by the Minister of Education, the Reverend Honourable Ronald Thwaites in his Central Kingston constituency on behalf of the Prime Minister of Jamaica, The Most Hon. Portia Simpson Miller, as part of the Digicel Foundation’s 10 th anniversary celebrations.  Commissioned by the Foundation as a gift to the extraordinary Jamaicans that they have worked with for their first 10 years, the monument was created by Jamaican artists Chungknight and Raymond Watson and murals were done by Studio 174.  The monument consists of 49 statuettes at its base which is representative of Jamaica’s past and present, it has at top two golden central figures rising above in fluid motion representing, according to the artists,  dynamism and hope for the future. The roundabout is the focal point of a larger beautification project being undertaken by the Digicel Foundation since 2012 in partnership with the National Solid Waste Management Authority (NSWMA), the Jamaica Cultural Development Commission (JCDC), the Kingston a and St. Andrew Corporation (KSAC), the Urban Development Corporation (UDC) and the members of the Rae Town, Parade Gardens, and Allman Town communities. Minister Thwaites, speaking on behalf of the Prime Minister, said: “through its commitment to giving back, Digicel has positively impacted the lives of hundreds of thousands of Jamaicans. In fact, focusing on the areas of education, community development and special needs, the Digicel Foundation has invested over US$19.5 million, directly impacting over 446,000 beneficiaries through 447 projects across Jamaica. This is no small achievement and is worthy of commendation and support. We appreciate this vital partnership in the areas of Education, Special Needs and Community Development.” The roundabout was landscaped with the assistance of Digicel staff volunteers, members of the neighbouring communities as well as Minister Thwaites and The Most Hon. Portia Simpson-Miller. Digicel Foundation’s new Chairman, Jean Lowrie-Chin, said, “Under the generous patronage of Digicel Chairman Denis O’Brien and partnerships with local and international organizations, the Digicel Foundation has set a remarkable pace for sustainable development.” Since its inception in 2004, the Digicel Foundation has completed over 400 projects with an overall investment of J$2 billion and positively impacted the lives of over 400,000 Jamaicans in the areas of education, special needs and community development.