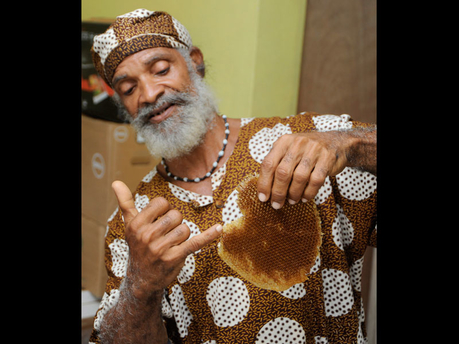 [caption id="attachment_2419" align="alignleft" width="300" caption="Jermaine Barnaby/ Jamaica Gleaner Photographer"] [/caption] Oronde McNish, president of the St Thomas Bee Farmers' Association, is looking forward to sweeter days as he expects the economic benefits to be derived from his recently constructed wax apiary to be substantial for him, the parish, and Jamaica in the long run. "Most bee farmers harvest a minimal amount of wax, so over the years, because of the rapid expansion in the industry, it creates a shortage of wax foundation both for expansion and to meet the needs of new entrants," he McNish told The Gleaner. Wax foundation is a plate made of wax. It is used to give the bees a foundation on which they can build the honeycomb and is considered to be one of the most important inventions in modern beekeeping. "The answer for that was to import plastic foundation from abroad, which would result in an outflow of money from poor communities in Jamaica to go abroad to bring in plastic. This plastic may also contain diseases such as the American foulbrood, which would have a terrible impact on the bee industry in Jamaica. We were looking for a natural substitute or a natural way of getting around the wax foundation," McNish added. He noted that there are close to 500 bee farmers within St Thomas alone, each having to import wax foundation from overseas. NEEDED TO FIND ALTERNATIVE Because of the high costs and diseases that accompany importing wax foundation, McNish, like many other bee farmers, sought a better method. Fortunately, the Office of Social Entrepreneurship at the University of the West Indies, Mona, and the Local Initiative Facility for the Environment referred the St Thomas Bee Farmers' Association to the Digicel Foundation. "In our first meeting with the St Thomas Bee Farmers' Association, we essentially wanted to find out how we could support the association and their work. What they had identified is that there was a shortage of wax foundation sheets in the country," Kerry-Jo Lyn, senior programme manager at the Digicel Foundation, told The Gleaner. "Every bee farmer needed this foundation, so they had put forward a project proposal to fund a wax apiary, which could either make honey; honey and wax; or honey, wax and pollen, depending on the configuration of the hive. It only made sense for us to embark on this initiative, as one of our main focuses is social enterprise and community development as it assists with sustainable livelihoods as well as food security and import substitution," she added. Since the creation of the apiary almost a year ago, the St Thomas Bee Farmers' Association has seen improvements. However, there has been a decline in the bee industry over the past two years. "Unfortunately, since we started the apiary, the honey production hasn't been as good. Hurricane Sandy had caused a lot of damage to our forestry, hence impacting the number of bees. The trees are recovering, however, and with that, we are in for brighter days," McNish said. "The apiary has been a blessing, as by doing the wax foundation here, you are able to provide it at a lower cost to the local farmers. It gives us a sense that we are contributing towards the development of our country through local produce," he continued. According to McNish, a pound of wax in St Thomas generally costs $800. When developed into wax foundation, it is sold for $1,500 per pound. He also noted that each bee farmer would require an average of 10 pounds, depending on the size of their bee farms. "We are now looking at how we can use the raw material to make other things, as we are now able to make items such as candles from the wax and gain additional income from that to further build the bee industry in Jamaica," McNish said. Taken from the Jamaica Gleaner | Written by Alessandro Boyd on June 16, 2014