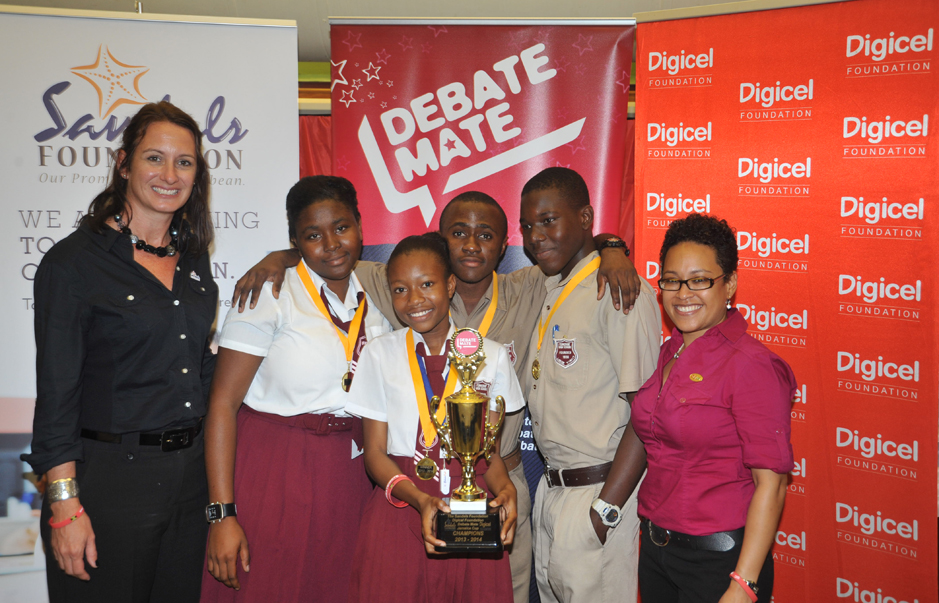 St. Ann based school, Fern Court High copped first place, earning them the Sandals Foundation Digicel Foundation Debate Mate Jamaica Cup. The school also obtained the top place in their region, winning the Ocho Rios Urban Debate prize. St. Andrew Technical High came in 2nd place, while William Knibb Memorial High and St. James High placed 3rd and 4th respectively. “I applaud the efforts of this organization as this has been one of the best interventions I’ve seen in a long time,” noted Claude Rowe, Dean of Discipline and Debate Coach at Fern Court High. “In the ten weeks of Debate Mate, I’ve noticed a complete change, improvement not only in the quality of their arguments, but also in their behaviour.” With over 400 students from 19 secondary schools competing, energies were high as teams battled not only for first place but also for the regional prizes. Spot Valley High in Montego Bay was the Montego Bay Urban Debate winner, while Calabar Primary and Junior High was awarded the Kingston Urban Debate Prize. The competition took place on December 16 at the Rex Nettleford Hall at the University of the West Indies, Mona. Among the schools participating were: Boystown All Age, Haile Selassie High School, Trenchtown High School, Tivoli Garden High School, Charlie Smith High School, Calabar Junior High School, Denham Town High School, Holland High School, Flankers Primary and Junior High School, St James High School, Anchovy High School, Spot Valley High School, Oracabessa High School, Steertown Academy, Ocho Rios High School and Marcus Garvey High School. Kerriane Matt, English teacher at Marcus Garvey High, notes the benefits of being involved with Debate Mate, “It is a wonderful learning experience that allows students to express themselves freely on current everyday issues. It enhances students’ confidence and most importantly their critical thinking skills, which will make them prominent members of our society.” “Debate Mate is really fun. It has helped me talk more and fight less. It has also helped me with my English A and B work,” noted Fitzroy Hines, student at William Knibb Memorial High School. Among the judges for the final debate were: His Excellency David Fitton, the British High Commissioner, Karlene Dawson, Digicel Foundation Board Director and Keith Collister, Chair of the Sandals Foundation. Debate Mate Jamaica, the sister organization of a London based charity Debate Mate, is culminating its pilot programme with a national inter-school debating competition. Founded in 2008 by CEO Margaret McCabe, barrister-at-law, Debate Mate is an educational charity dedicated to improving social mobility. The organisation began its after-school programme in 30 London secondary schools and is now in over 200. In Jamaica, Debate Mate’s core programme consists of after-school debating clubs led by inspirational mentors who are students at the University of the West Indies, University of Technology and Mico. The programme lasts 10 weeks and is targeted at students aged 11-15 years. More than 500 students have gone through the programme this year. This year, Debate Mate Jamaica has welcomed onboard the Digicel Foundation, which has pledged US$20,000 to the 2013/2014 programme. Meanwhile, the Sandals Foundation continues its partnership, having invested US$35,000 to date in support of the 2013 summer programme and the 2013/2014 pilot programme. “It is our pleasure to partner with the Sandals Foundation on such a worthy initiative,” noted Kerry-Jo Lyn, Senior Programme Manager for Community Development at the Digicel Foundation. “Debating is an art that can only enhance a student’s academic and professional career. It is something that I believe should be incorporated more readily in a school’s curriculum, especially at the high school level.” “The Sandals Foundation chose to partner with Debate Mate in the past because of the potential this initiative showed in being able to develop the participants’ ability to speak publicly, while exposing them to the benefits of being able to construct arguments,” said Heidi Clarke, director of programmes of the Sandals Foundation. “We’re very pleased to be able to continue this partnership. The Debate Mate programme is very inspiring, mainly because of the immediate results we see in the children who have participated. Their confidence not only gets a significant boost, but they’re able to move beyond physical responses to conflicts and resolve disagreements through dialogue. The Sandals Foundation is very impressed by the progress Debate Mate has made and we look forward to greater achievements as the programme progresses.”