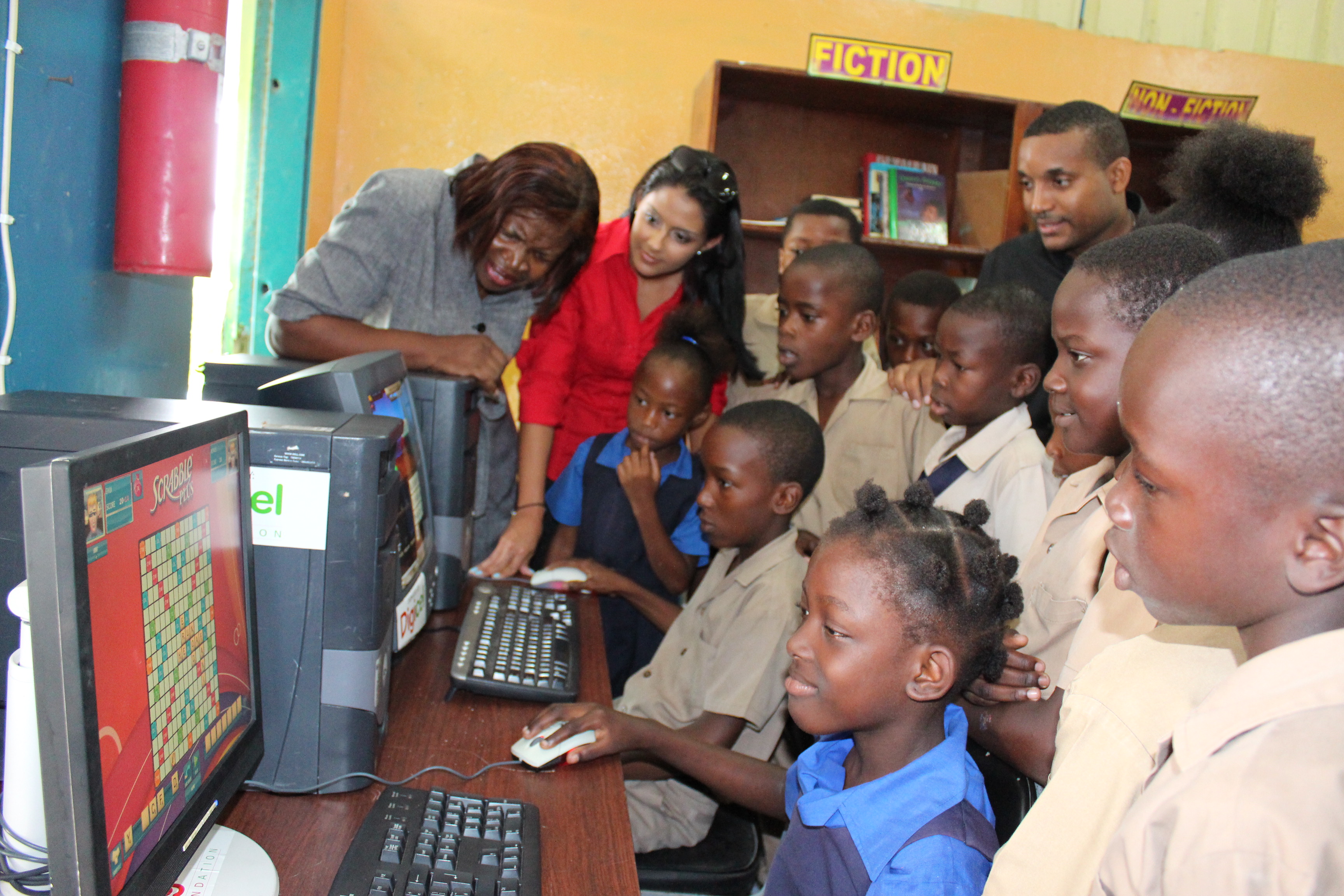 Recently ranked by the National Education Inspectorate (NEI) as one of the top schools reviewed, Arcadia Primary School in St. Thomas has accomplished this feat without the benefit of Information Communication Technology (ICT). Now the school will be able to maximize its potential through ICT, thanks to the Digicel and Camara Jamaica Foundations. Both groups installed computers preloaded with educational software at the school on July 3. “These computers will assist the students with Reading, Mathematics and Numeracy,” noted Carmen Chambers, Principal . “Once they are literate and numerate, the students will be able to better function in other areas.” Nestled in the hills of St. Thomas, the school of 50 students has for years been seeking to get assistance to further enhance the quality of education offered. “When we heard that Arcadia Primary had been doing so well to have been highly ranked by the NEI, we wanted to reach out and congratulate the teachers and students for their hard work, especially in light of limited resources,” noted Samantha Chantrelle, Executive Director of the Digicel Foundation. “Arcadia’s progress is a testament to what can be accomplished with drive and determination. I’m confident that Arcadia will continue to grow and flourish. The Digicel Foundation is happy that we could make a contribution to further the school’s development.” Arcadia Primary received two new computers under the Digicel Foundation’s Project 1000. This initiative will provide one thousand early childhood and primary institutions across the island with ICT equipment over the course of three years. Project 1000 is geared towards meeting the United Nation’s Millennium Development Goal of achieving 100% literacy by 2015. The (ICT) equipment provided will offer additional learning resources to aid with the teaching of Phonics, Reading and Mathematics. The computers are preloaded with educational software specifically designed to enhance literacy and numeracy skills. The computers though funded by the Digicel Foundation, are sourced and installed by the Camara Jamaica Foundation. The teachers are also trained by Camara to use these resources in the classroom effectively. “The Camara Jamaica Foundation has been working to improve education in Jamaica by providing low-cost technology, teacher training and IT technical support to schools for the past 2 years. Project 1000 was launched to provide 1000 early childhood public schools with well-needed computers over the next 3 years.  Approximately 50 computers and 10 laptops have already been delivered between May and June this year and we are on track to deliver over 150 computers to 75 more schools this summer.” Since the launch of Project 1000 in April, nearly 3000 students have benefited. Approximately US$375,000 will be invested in this initiative. During the past two years, both the Digicel and Camara Foundations have donated more than 750 computers islandwide. “The Digicel Foundation has been helping quite a number of schools not only in St. Thomas, but in other parishes as well. I would encourage other schools to apply as I am sure Digicel will be more than happy to help them,” remarked Principal Carmen Chambers.