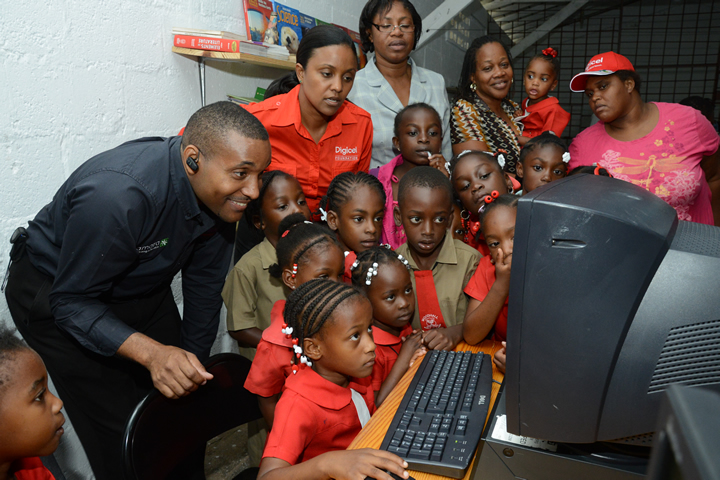 The Digicel Foundation on Friday March 15, handed over five computers and a laptop to the Wood Hall Basic School in rural Clarendon. The ceremony took place at St. Luke’s Anglican Church in Wood Hall. The computers, donated through a partnership with the Camara Jamaica Foundation, will be used to provide additional learning resources to enhance teaching and learning in the classroom, specifically the teaching of phonics and reading.  Principal Neketa Bryan, expressed gratitude to the Foundation for the opportunity to expose his students, many of whom do not have access to computers at home or to technology at an early age. He said he will also use the computers to advance an initiative to promote computer literacy among the youth and parents in the community. “This is most welcome,” Bryan said of the donation. “It is something we have been contemplating for some time to be able to get the children off to a good start. We will ensure that we use it for the right purpose to make a difference to the students and the community.” The Digicel Foundation is partnering with the Camara Jamaica Foundation to encourage the exploration of technology to access information and knowledge. Last year, they donated some 500 computers to institutions islandwide which were all preloaded with educational software. For the next phase of this overall initiative, Camara Foundation Jamaica will be training teachers to effectively use these resources in the classroom. Digicel Foundation’s Executive Director, Samantha Chantrelle, said the Foundation was proud of its association with the Camara Jamaica Foundation and that they were happy to have been able to give the Wood Hall Basic School the necessary resources to make a difference in not just the school population, but the community at large.  “This is the kind of difference we want to make. We look forward to being able to assist more schools in other areas of Jamaica, as the value of this type of technology cannot be overstated,” Chantrelle said. In the meantime, CEO of the Camara Jamaica Foundation, Karl Gaynor, who was in attendance at the ceremony, said he too was thrilled.  “I am really excited about any partnership that is education-focused and that is pushing to improve the education system in our country. And especially with the Digicel Foundation because they really are pioneers,” Gaynor said. Former student of Wood Hall Basic School and CEO of Nesta & Company, Robert Nesta Morgan, had approached the Digicel Foundation on behalf of the school. He said it was wonderful that the Foundation had found it fitting to make the donation.  “This donation proves that both entities are not only interested in education but are also interested in the development of rural communities,” said Morgan. He said he hoped that other organisations would follow Digicel Foundation’s and Camara Jamaica Foundation’s lead.