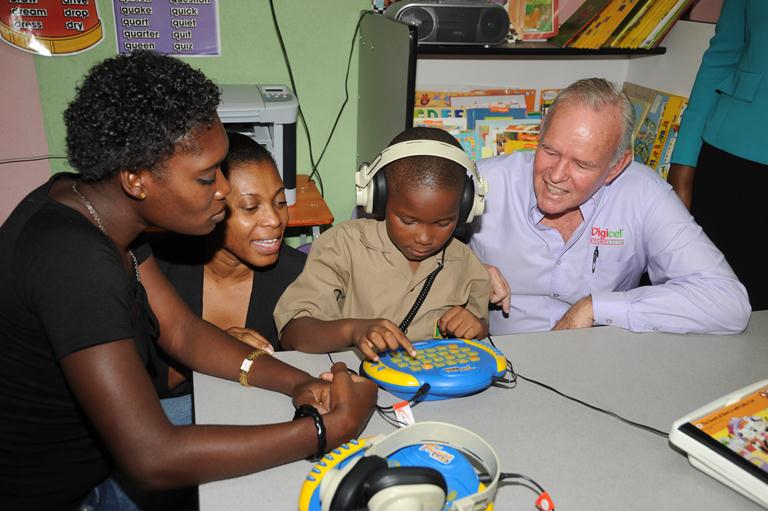 With the start of the new school year, 50 schools island-wide will receive Mobile Enrichment Carts from the Digicel Foundation, to the tune of $25 million. The carts are equipped with a laptop loaded with literacy and numeracy software including Hooked on Phonics, Phonics Pad and Early Success among other programmes. This equipment assists teachers with academic intervention for students in grades 1-3 who are under-performing in literacy. In an attempt to identify 50 deserving schools, the Foundation launched its ‘Nominate 2 Educate’ campaign in July 2012 in celebration of Jamaica’s 50 th anniversary of Independence. The public was therefore called upon to nominate schools in need of assistance through the Digicel Foundation Facebook page. At the end of the nomination period in August 2012, a total of over 250 nominations were received. The Mobile Enrichment Carts are part of the Digicel Foundation Enrichment Initiative, a joint programme of the Digicel Foundation and the Ministry of Education. Launched in 2009, the Enrichment Initiative aims at increasing literacy and numeracy at the primary level with the goal of helping the government meet the UN Millennium Development Goal of achieving 100% literacy by 2015. The additional 50 schools receiving Mobile Enrichment Carts this year, will bring the total number of schools benefiting from the initiative to over 100. “This is extremely good and I know this will help us,” noted Alvia Thompson-Haye, Principal of Tranquillity All Age in Portland. “Some children in grades 1, 2 and 3 need this type of intervention. These children gravitate towards the computer, especially since we are in a rural area and many are not exposed to the technology. It will be so good to get this type of exposure and a new way of introducing literacy concepts.” Among the 50 new schools that will receive Mobile Enrichment Carts are: Elletson Primary and Infant School in Kingston; Cedar Valley Primary and Junior High and Prospect Primary School, both in St. Thomas; Port Antonio Primary School and Tranquility All Age in Portland; Walkerswood All-Age School, Charlton Primary School and Breadnut Hill School, all in St. Ann; Unit Primary School, First Hill All Age School and Duanvale Primary in Trelawny; Cambridge Primary School, Vaughansfield Primary and Roehampton Primary in St. James; Broughton Primary and Ferris Primary Schools in Westmoreland; Cacoon All Age and Mount Peto Primary Schools in Hanover; Morningside Primary, Holland Primary and Barbary Hall Primary,  all in St. Elizabeth. Schools with a population of under 300 students that had achieved less than 50% mastery on the Grade Four Literacy Test over the past two years were eligible for nomination for an Enrichment Cart.  In order to become a part of the Initiative, all nominated schools also had to receive approval from the Ministry of Education. In addition to a laptop loaded with literacy and numeracy software, the carts are also equipped with a multimedia projector, copier/scanner, laser printer, audio speakers and a reversible whiteboard. Carts also typically include Internet access, courtesy of Digicel’s 4G broadband for the first year. “As a nation we celebrated not only 50 years of Independence, but 50 years of achievement in sports, education and the arts,” noted Samantha Chantrelle, Executive Director of the Digicel Foundation. “In order to attain even greater success, strong literacy and numeracy skills serve as the cornerstone for any society. This is why the Digicel Foundation is strongly committed to playing our part in reaching that UN Millennium Development goal of 100% literacy by 2015.” With 50 more schools receiving Mobile Enrichment Carts, nearly 9000 additional students will benefit from the Enrichment Initiative.