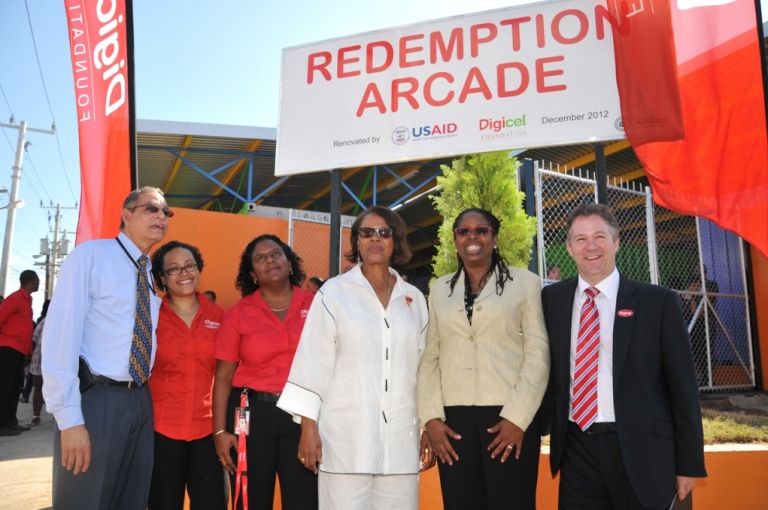 Over 130 vendors are getting ready to set up their shops in the newly refurbished Redemption Arcade in Downtown Kingston. Formerly known as Redemption Market, the Arcade has been fully repurposed as a haberdashery (dry goods only) to the tune of $US500,000. The funds were provided by the United States Agency for International Development, (USAID), and the project implemented by the Digicel Foundation. Other partners include the Kingston and St. Andrew Corporation (KSAC) and the Urban Development Corporation (UDC). “Everyone is happy to know that the market has been given a makeover,” commented Opal Hume, Market Manager. “The market was in a deplorable state before, now it’s nicer, prettier, and cleaner and more people will come inside here to shop now.” The Digicel Foundation and USAID officially handed over the Arcade to the KSAC at the location on Friday, December 14. The refurbished Arcade now includes over 130 shops, a new roof over a section of the market, and improved water, sanitation and waste management facilities. It will be fully opened and ready for business in January 2013. “We are always in support of projects that encourage social entrepreneurship,” noted Samantha Chantrelle, Executive Director of the Digicel Foundation. “Economic opportunities and growth are critical to social mobility and the Digicel Foundation wants to continue to play an active role in empowering individuals and communities alike towards this goal.” Downtown Kingston has long been the commercial hub of Kingston. However the markets, though a vibrant part of the social and economic environment, were seriously in need of repair. In 2011, the Digicel Foundation refurbished Coronation Market and with assistance from USAID has been able to renovate Redemption Arcade. The project is among several adopted by Digicel with the goal of revitalizing and promoting the Downtown Kingston area as an attractive, safe and vibrant place to shop and conduct business. Digicel Jamaica’s commitment to the Downtown Kingston area is further underscored by its recent decision to move its global Headquarters to Downtown Kingston. In her address U.S. Ambassador to Jamaica, Pamela Bridgewater noted that, “this transformation will create economic opportunities for the vendors, as well as a variety of service providers within the combined market district ... Digicel Jamaica Foundation and USAID are committed to Jamaica’s development. Her Worship the Mayor Councillor Angela Brown Burke stated that, “today is a really good day. We are seeing coming into fruition a dream we long had ... and the KSAC has every intention of making this a model Arcade, including the security and safety of our vendors and shoppers.” After the formalities, guests were invited to tour the newly renovated Arcade.