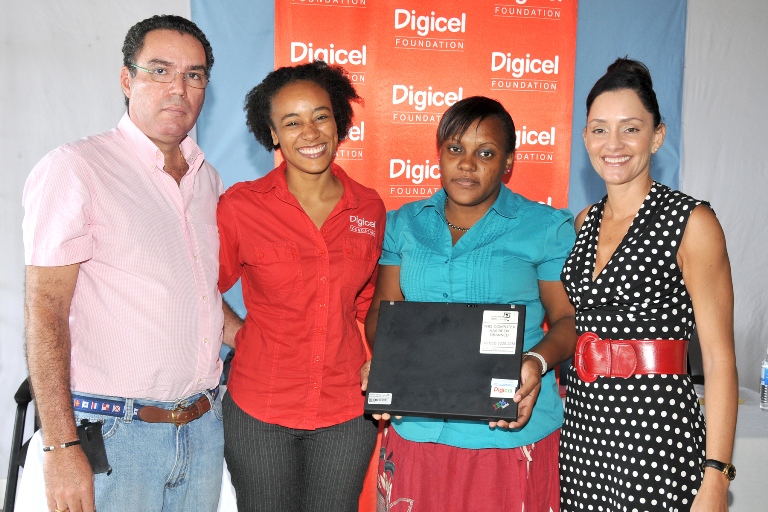 Two thousand students will benefit from the 35 computers that were presented to representatives of the West Portland Development Fund in Lynch Park on Wednesday, November 28, courtesy of the Digicel Foundation. The Development Fund will then turn them over to representatives of the respective schools for which they are destined. The hand over came at an opportune time due to the damage caused to computers and other educational resources by the passage of Hurricane Sandy. Since 2007, the West Portland Development Fund has actively sought to bridge the digital divide experienced by a number of educational, religious and community based organizations by developing three computer facilities across the parish. These were placed in the communities of Buff Bay, Hope Bay and St. Margaret’s Bay. However, there remained a wider need for such facilities throughout the parish. “We want to commend Digicel Foundation for this kind contribution.  They have been very supportive of the hurricane relief effort in Portland,” noted Daryl Vaz, MP for West Portland. “They have also given $500,000 to the repair efforts of Windsor Castle All Age School,” continued Vaz during his address at the handing over ceremony. With the additional 35 computers, the West Portland Development Fund will be able to distribute up to 2 computers to 32 educational institutions in Portland. The computers are provided by the Digicel Foundation through a partnership with the Camara Jamaica Foundation. Camara Jamaica uses technology to improve education through computer reuse Camara also provides software training for teachers in institutions which utilize its computers across Portland. “Camara is involved in technology education, and we want to be involved in the re-development of Portland, in the rural areas particularly, in a way that is impactful, especially given what happened with Hurricane Sandy,” noted Karl Gaynor, Camara Jamaica’s CEO. Some of the 32 beneficiaries include: Coopers Hill All Age; Orange Bay Primary, Windsor Castle All Age; Bradford Academy; God’s Way Basic School; Buff Bay Baptist; Emanuel Basic School; Bloomfield Basic School; Fruitful Vale Basic School; Shirley Castle Basic School and Shrewsbury Basic School. “Providing the necessary resources to get children engaged in technology and learning is something that we are passionate about,” remarked Samantha Chantrelle, Executive Director of the Digicel Foundation. “With Hurricane Sandy causing so much damage to a number of schools in Portland we wanted to be involved in getting students back on track.” This increased access will improve computer literacy and can enhance students’ preparation for various assessment tests. The Digicel Foundation’s partnership with Camara Jamaica Foundation is aimed at providing much needed technological resources for our educational institutions to enhance content delivery. It is very much in keeping with the Digicel Foundation’s primary educational initiative, the Enrichment Initiative.  The Enrichment initiative was launched, in partnership with the Ministry of Education, in 2009. It supports the Government of Jamaica’s aim of achieving the UN Millennium Development Goals of 100 per cent literacy at the grade-four level by 2015. This initiative utilises innovative information, communications technologies and specialised teaching methodologies to engage students who are underperforming in literacy in grades one through three. To date, approximately 6000 students in 58 schools islandwide have benefited from the programme which has seen an average improvement of two grade levels in students’ reading within the first year of participation. In celebration of Jamaica’s 50 th Anniversary of Independence, the Digicel Foundation will take this initiative into an additional 50 schools this year.