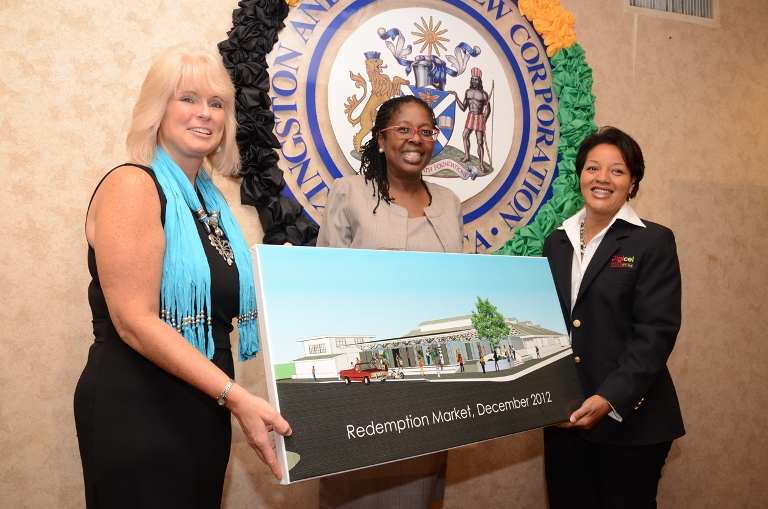 A collaborative project scheduled for completion in time for Christmas

Over 130 vendors in the Redemption Market in Downtown Kingston will benefit from newly renovated facilities, including new stalls and roof, in time for the busy Christmas season, thanks to a collaborative initiative by the Digicel Foundation; The United States Agency for International Development, (USAID); the Urban Development Corporation (UDC) and the Kingston and St. Andrew Corporation (KSAC). The announcement was made during a joint press conference at the KSAC’s office on Church Street in Downtown, Kingston on Thursday, September 6 , 2012. The collaborative project will see the Redemption Market being repurposed as a haberdashery, at a cost of US$500,000. With demolition already taken place, the renovations are scheduled to be completed by December 2012. The refurbished market will contain over 130 new stalls along with improved water, sanitation and waste management. The Downtown Kingston market district has long been an essential part of life in Jamaica, but for some time now, the markets have been on the decline. Having recently refurbished the Coronation Market in 2011, the refurbishing of the Redemption Market is therefore yet another step towards revitalizing and rejuvenating Downtown Kingston and bringing economic development back into to what once was the commercial hub of the capital. Through this project, Digicel Foundation looks forward to promoting Downtown Kingston, and particularly the markets, as a viable, attractive, safe, secure and vibrant place to conduct business and buy products. In announcing the initiative, Lisa Lewis, Chairperson of the Digicel Foundation said, “Economic growth and access to economic opportunity are directly correlated to social mobility and form the foundation for promoting prosperity and social justice, this is why we at Digicel Foundation are particularly interested in initiatives such as this that encourage social entrepreneurship.” She went on to add that “Digicel Foundation was founded on the belief that where Digicel grows, our communities must grow with us; it is therefore fitting that we undertake this initiative as we prepare to move into our new home, right here in Downtown, Kingston. Ms Denise A. Herbol, USAID Mission Director also noted, “There is so much potential for the growth of businesses here in Downtown Kingston and USAID is committed to assisting in growing the area. We believe this transformation will create economic opportunities for the vendors, as well as other service providers within the combined market district. The market will generate employment and produce income opportunities for the surrounding communities.” Her Worship the Mayor Councillor Angela Brown Burke joined representatives USAID, Digicel Foundation and the UDC in addressing guests at the announcement ceremony. She was presented with an artist impression of what the competed redemption market will look like by the Digicel Foundation and USAID. Following the formalities, guests were invited on a tour of the Redemption Market to see its progress.