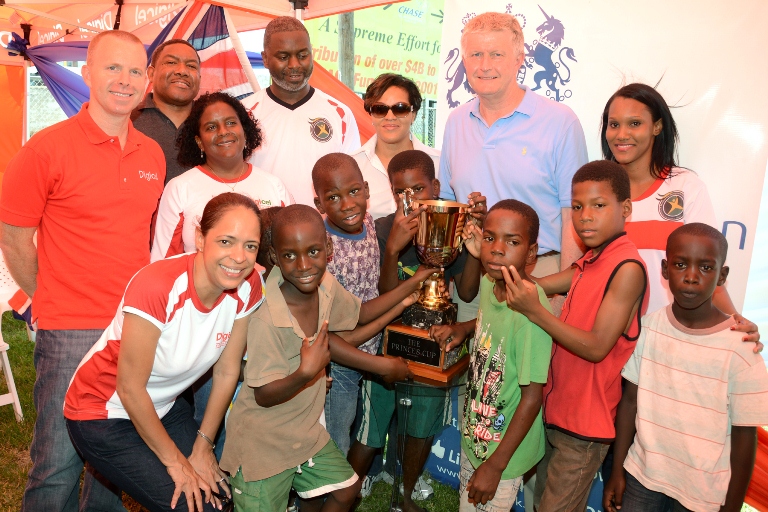 The Digicel Foundation Prince of Wales Community Peace Cup Initiative was launched in Boys’ Town on Saturday, July 14. The Initiative is a joint effort of the Digicel Foundation and community group Beacons For Peace and Achievement (BPA). The competition operates with the primary goal of promoting peace, volunteerism, and leadership building through sports. Chairman of the London Metropolitan Black Police Association, Bevan Powell, MBE, served as the guest speaker. British High Commissioner, His Excellency Howard Drake and Executive Director of the Digicel Foundation, Samantha Chantrelle, also brought greetings. The initiative encompasses a series of football competitions which will be held in all 14 parishes August-November. This component of the initiative is being implemented in association with the Chelsea Foundation which carries out a similar initiative with at risk youth in the UK. Teams with unattached players 15-24 years of age are eligible to compete. Participants must be amateurs and should not have participated in any professional football matches in the past. Application forms are available on the Beacons For Peace and Achievement Facebook page. The winning team will receive a cash award and the trip of a lifetime, including the chance train with coaches of the Chelsea Football Club – winners of the 2012 UEFA European Champions League. Our local team will also serve as youth ambassadors for Jamaica on this trip to London. Parish winners will also be presented with a variety of prizes. The initiative specifically targets ‘at risk youth’ by engaging them in sports with the hope that this will deter involvement in crime or other harmful activities. In addition to the football matches, capacity building workshops for team captains and vice captains will be held. These workshops will focus on building leadership skills, encouraging positive life changes through non-violent means and the overall promotion of peace. An estimated 600 young men will benefit from the workshops. Additional capacity building seminars focusing on youth-to-youth mentorship, entrepreneurship and peace change leadership will be held across the island. Over 8,000 youth will benefit from the overall initiative. “In their 2000 assessment, the Ministry of National Security estimated that over 75% of the perpetrators and victims of crime are young men 24 years and younger,” notes Samantha Chantrelle, Executive Director of the Digicel Foundation, “Attention must be paid to our country’s ‘at risk youth,’ engaging them and channelling their energy through sports, can be an effective tool in curbing criminal or unsafe activities.” The Digicel Foundation has committed over $7 million to assist BPA in executing the 2012 Prince of Wales Community Peace Cup. BPA, an initiative of the London Metropolitan Black Police Association, was first implemented in the UK in 1994. Their programmes have since expanded to other countries including Jamaica, the United States and South Africa. This global organization continues to operate with the mission of creating a crime free society with equal opportunities for all youth. The first Prince of Wales Community Peace Cup was launched in 2001 in Jamaica and continues to be endorsed by His Royal Highness, Prince Charles. Other partners include the Ministry of Youth, the British High Commission, UNICEF and the Chelsea Football Club. Chief media partners are CVM, IRIE FM and the Gleaner. Associate media partners are KLAS and Roots FM.