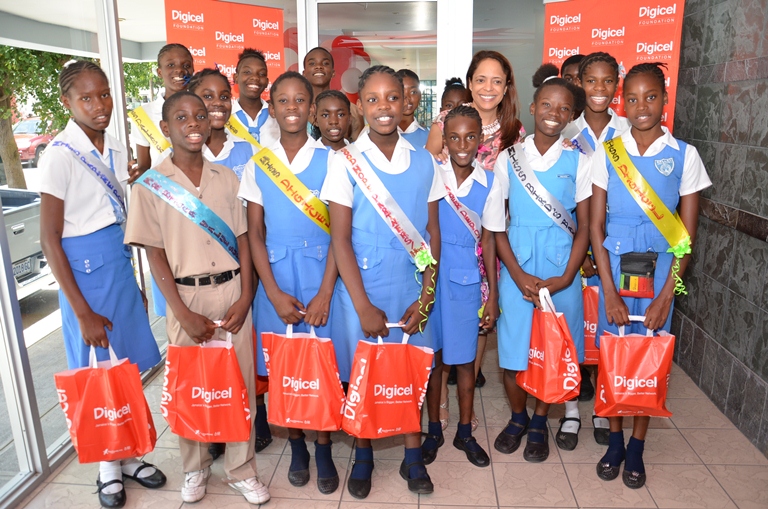 Fifteen Dallas Castle Primary and Junior High students paid a courtesy call at Digicel Foundation in New Kingston on Wednesday June 28th. The students toured the offices of the Digicel Foundation, where they learned more about the work the Foundation does, and visited with Executive Director Samantha Chantrelle.

The school’s administrators planned this special trip as part of the school's Ms. and Mr. Dallas Competition designed to boost self-confidence and create awareness of the history and culture of the Dallas community. Courtesy calls paying tribute to a number of persons and organizations that have supported the school, are a part of the programme for the Ms. and Mr. Dallas hopefuls. The Dallas group expressed particular thanks to Digicel Foundation during their visit.

“We are so happy that these students decided to visit us here at work," commented Mrs. Chantrelle, "It is usually our Foundation team that goes out to see the students at their schools – it was lovely to have them come and visit us.”

Dallas Castle Primary and Junior High is one of 58 schools to have benefited from the joint Enrichment Initiative between the Digicel Foundation and the Ministry of Education. This initiative was launched in 2009 with the goal of achieving 100% literacy at the grade four level. The Digicel Foundation has invested over $100 million in the Enrichment Initiative so far. Twenty-Seven Enrichment Centres have been built and 31 Mobile Carts have been distributed islandwide.

Last September, the Foundation supplied Dallas Castle Primary and Junior High with a Mobile Enrichment Cart. Mobile Enrichment Carts typically come equipped with netbooks loaded with literacy and numeracy software including Hooked on Phonics, Phonics Pad and Early Success among other programmes. Two teachers were trained in the use of the material supplied. Access to the Internet is also typically provided through Digicel’s 4G Broadband service and a multimedia projector and a copier/scanner are included in the Mobile Cart package. The Cart is used for several grade levels and is not confined to a particular class or classroom.

Having observed the outdated condition of the computers currently in the school’s computer lab during a site visit, the Digicel Foundation will also be providing the school with an additional 10 computers through their partner the Camara Jamaica Foundation.

“Achieving 100% literacy by 2015 is a Millennium Development Goal, and we are doing our part to ensure that this goal is met,” noted Mrs. Chantrelle.