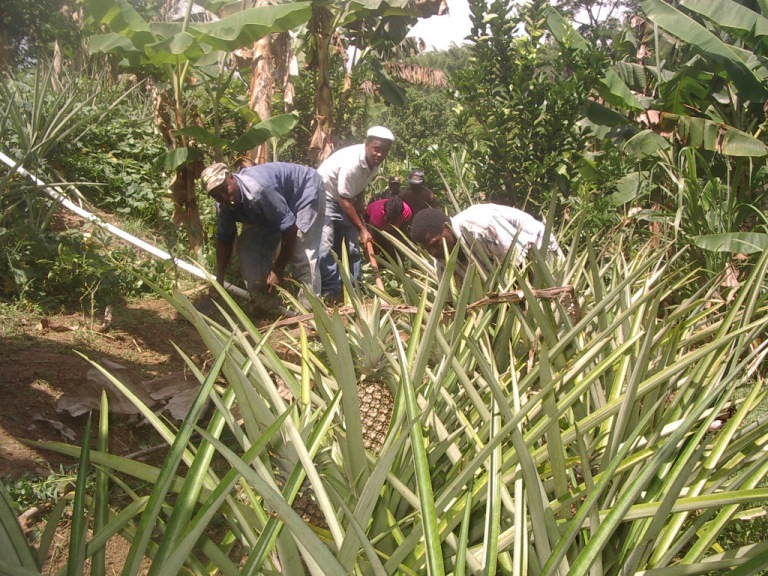 Although Glengoffe in St. Catherine is famous in Jamaica for its bamboo, straw and woodwork, this community was also recognized internationally for its climate change initiative. The community recently entered its climate change programme in the United Nations Volunteers (UNV) ‘What you know inspires’ competition. Thirty-Eight countries entered and Jamaica and Uzbekistan were announced the winners earlier this month. Among the areas of Glengoffe's projects that were highly praised by the judges were soil conservation, drought mitigation and income generation. In the area of soil conservation, sugar loaf pineapples, bamboo, cedar and mahogany trees are among crops planted to prevent the heavy rains from washing away valuable topsoil. “A lot of the land was washing away,” comments Gladstone Mitchell, a Glengoffe farmer, “but since I started planting my sorrel in between the pineapple, the results have been good. Now, the demand is greater than what I can produce.” Reforestation efforts are also in place there, as fruit, spice and other trees have been planted across the community. A drip irrigation system has been installed, securing a water supply to maintain crops during droughts. Most of the crops grown in Glengoffe serve a dual purpose. The sugar loaf pineapple and other fruit crops are used as vegetative barriers preventing soil erosion. The growing of these crops as well as cabbage, potatoes, sorrel, peas, cucumbers, and pak choi not only provide jobs for community members, but also generate income. These measures have produced significant results for the community. To date, 7000 fruit trees have been planted and food crops have generated approximately $750,000. Over 1800m of log barriers have been installed to protect against soil erosion. Glengoffe has improved its food security by 20-30% as the community sources certain food items for itself. For example, 75% of the community’s cabbage supply is sourced internally. Not surprisingly, Glengoffe is a past national and parish winner, and a current contender, in the National BEST Community Competition. The community has entered the 2011-2012 Competition in the following categories: beautification and clean-up of roadways and walls; establishment of a revolving pig scheme; hazard mitigation training; youth training in leadership and capacity building and several others. Digicel Foundation continues to be a major partner of the National BEST Community Competition and Programme through a variety of grants. Since its inception, the Foundation has committed a total of $55 million for these life-changing projects. In 2007, the Foundation presented Glengoffe with $2 million for having placed first at the national level. The Glengoffe Community Development Committee used the prize money to purchase property to establish a development Centre and where a playfield for youngsters has been built. “We didn’t have anywhere for the children to play ball and practice their sports. Having a playfield is very important for the development of our young people,” commented Glengoffe Community Development Committee (CDC) President, Roosevelt Lawrence. The competition was established in 2006 by the National Best Community Foundation It is designed to promote self-reliance and positive environmental and other practices within communities across Jamaica. Participating community organizations are charged with designing and implementing projects that enhance community life as well as rendering them self-sufficient and making them sustainable. An impressive number of extremely positive initiatives have developed among Glengoffe and over 200 other communities across Jamaica which have participated in the National Best Community Competition over the years. These have included training, creation of jobs and of cottage industries, food production, beautification and improved environmental practices. In particular, substantial prizes in the form of cash have been invested by the communities to further their development. Judges for the 2011-2012 National Best Communities Competition have been travelling to 245 communities across the island. They have already visited Glengoffe for judging at the parish level. Parish winners will be announced by early July 2012. For the current competition, Glengoffe CDC President, Roosevelt Lawrence, is confident that his parish will again place this year, “nobody can beat us in the area of self reliance and best agricultural practice,” he says.