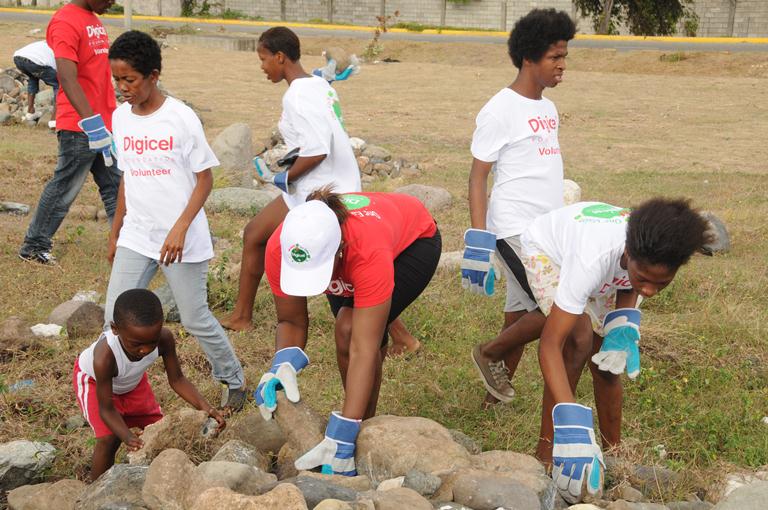 Art Competition set to engage members of Rae Town, Tel-Aviv and Southside  Labour Day for the communities of Central Kingston – Rae Town, Tel-Aviv and Southside – was all the coming together of people from these three communities in Central Kingston with staff volunteers from the Digicel Foundation to beautify its backyard – a round-a-bout that has been newly adopted by the Foundation and that is popularly known as the ‘gateway to Downtown’. An announcement by Lisa Lewis, Chairman of the Digicel Foundation, during its Labour Day project will see the manifestation of a bond that the communities will share for years to come through an art competition. “Today is only one phase in a bigger initiative that the Digicel Foundation has in store for the communities of Central Kingston. In recognition of Jamaica’s 50 th anniversary, we are pleased to announce an art competition in all three communities – Rae Town, Tel Aviv and Southside.” This competition will invite members from each community to submit designs depicting what Jamaica 50 th means to their community. The winning piece of art work from each community will be displayed on a three-sided monument that will be erected in the centre of the roundabout. The competition will run from the second week in June when the guidelines for the design along with the rules and regulations around the competition will be communicated to the communities. At the end of competition, the submissions will be judged by a panel consisting of a representative from each of the communities, representative from the Digicel Foundation, the Edna Manley School of Arts, as well as representatives from the Social Development Commission (SDC) and the Community Development Commission (CDC). Digicel Foundation will also be engaging the Edna Manley School of Arts to design and build a sculpture that will be erected top centre of the 3-sided monument to close it off. According to Samantha Chantrelle, Executive Director for the Digicel Foundation in an interview, "Digicel remains committed to the sustainable urban development of downtown Kingston. It is ultimately a cultural statement about ourselves, how we want to live, and our ability to manage our needs, desires and dreams in ways that are effective and caring. We chose this as a Labour Day project as the first of many opportunities this year for our staff to work together with the communities that, in just a few short months will be our neighbours when we move downtown”