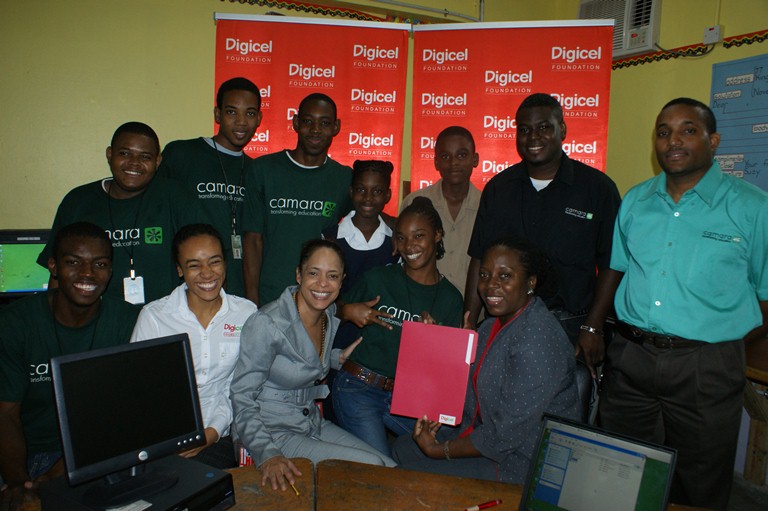 Shortwood Practicing PJHS Computer Lab Equipped On Tuesday March 6, 2012, Shortwood Practicing PJHS became the proud recipients of 20 new desktop computers and two laptops courtesy of the Digicel Foundation in partnership with the Camara Jamaica Foundation. This initiative was undertaken in response to an article that appeared in the media earlier this year explaining that the Shortwood Practicing PJHS was in desperate need of computers. Their computer lab had only three functioning computers forcing the Principal, Erica Ewbanks, to cancel the practical aspect of IT classes. The Camara Foundation was on hand with the Digicel Foundation to officially install the computers. The school’s computer lab is now fully equipped with 20 desktop computers and 2 laptops that the teachers will use. Principal Erica Ewbanks was visibly overjoyed at the results. “We asked for mere computers and we got all this; computers, instalment and literacy software. The teachers are very excited. This is really good because the children gravitate to ICT in the classroom more than just the talk and chalk and we are therefore so thankful to the Digicel Foundation for responding to our plea.” She however noted that while the computer lab now supersedes her greatest expectations, the school still had some other areas they would like to outfit with updated computers. As such they are still seeking further assistance with additional computers. Digicel Foundation Executive Director, Samantha Chantrelle, noted that Shortwood Practicing had a good track record at the GSAT level and rich history of excellent teaching and results. “The school has good leadership and a good vision, and we are always happy when we are able to come in and provide assistance for an acute need like this in our schools. With the current national push towards ICT in schools coupled with our on-going focus on education and ICT, we are especially happy to have been able to assist the school in this area.”