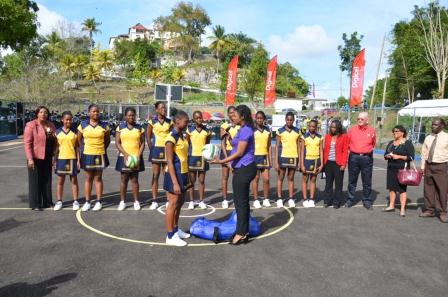 Kingston, Jamaica: The students and staff of Westwood High School, as well as the community of Stewart Town, Trelawny, are beaming with pride today following the official handing over of their refurbished Multipurpose Court courtesy of the Digicel Foundation.

The $2.5 million project which resulted in a state of the art court fit for netball, basketball and volleyball, came to the attention of the Digicel Foundation when Principal, Karen Francis, and her team, submitted an application to the Foundation expressing the state of disrepair their court had fallen into. She noted that many of the girls had been injured, suffering broken bones and torn ligaments during training sessions, due to the worn out asphalt and gravel build up on the court.

In expressing her appreciation to Digicel Foundation, Miss Francis noted that the building of the multipurpose court was a very timely exercise, “We are grateful to Digicel Foundation for this Multipurpose Court. It has alleviated the girls’ fear of injury and it will be used to foster teamwork and a spirit of competition among our girls and other schools in our area.”  She went on to add that “Westwood High School has a long tradition, not only of academic excellence, but also of imbuing its students with a fine sense of responsibility, citizenship and community; we believe that sports is an excellent medium for this and have thus sought to broaden the horizons of our students by incorporating sports into our curriculum”

At the handing over ceremony, the programme included Member of Parliament, Marisa Dalrymple-Philibert, and representatives of the Ministry of Education, Westwood Old Girls Association, and Westwood High School. Today’s events also included the handover of volleyballs and netballs to the school by the Digicel Foundation as well as a netball match between Westwood and Cedric Titus High Schools.