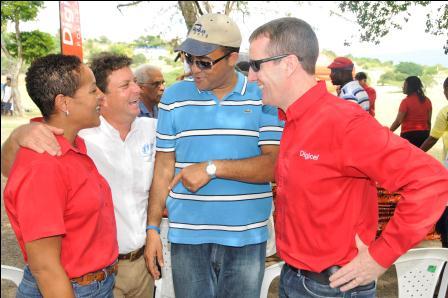 The community of Treasure Beach is being positioned to be a sports tourism hotspot with the establishment of the Treasure Beach Foundation Sports Park.  The park, which boasts first class cricket and football facilities; was launched on Saturday, November 12 and is being managed by the BREDS Foundation in Trust for the people of the community.   Speaking at the opening ceremony, Jason Henzell, director of the BREDS Foundation said the community was very happy about the park and had big plans for it.“This is really a dream come true for us because we really needed the investment in the social infrastructure.  We are really thankful to the Digicel Foundation for helping to make this possible,” Mr. Henzell said. There are plans to host local, as well as national and international events at the Park; but for now many local schools and clubs are making use of the complex.  The Sandy Bank Primary school, Newell United football club, Super Action football club, the Treasure Beach Cricket Club and other teams use the complex as a training base. There is also a playground on the compound. “The community has a clear vision of how it can develop through sports tourism and we are proud to play a role in realizing that vision,” said Major Robert Neish, Executive Vice Chairman of the Digicel Foundation.The Digicel Foundation donated $5.7M to create the complex in what is described as the second phase of the overall development plan.   Other partners who supported the programme include the Driftwood Gun Club, which donated cricket gear to the Treasure Beach Team.  As if to test out the new gear, the Treasure Beach Cricket Team challenged to a match and beat an all-island team of sports media journalists by seven runs. The South East St. Elizabeth Masters also competed against the team from the British High Commission.