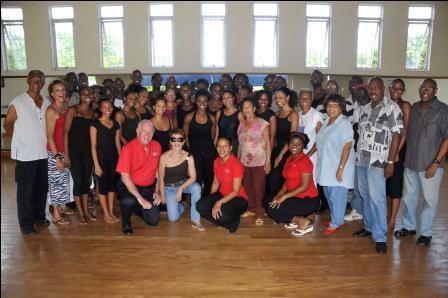 Monday, July 11, 2011, Kingston, Jamaica: The premier dance ensemble in the island – National Dance Theatre Company (NDTC) – yesterday officially opened the doors to its newly-refurbished offices on the grounds of the Little Theatre on Tom Redcam Drive in Kingston. Refurbished to a tune of JA$1,105,271 by the Digicel Foundation, the official handover has come on the brink of the NDTC’s new season of dance, which is set to kick off on Friday, July 22nd.

Artistic director of NDTC, Barry Moncrieffe expressed; “With our new office we are able to take certain forward steps and Digicel Foundation must be commended on their contribution to this project. Professor Rex Nettleford would have been elated about the Foundation's contribution to the Art form. The opening of the office was memorable and this kind of contribution is one of a kind from any organization to the NDTC and we are indeed grateful.”

The refurbished offices will add some structural sustainability to the preservation of the rich history of the NDTC and the works of Rex Nettleford. In commenting on the Digicel Foundation support in refurbishing the offices at NDTC, Executive Director for the organization, Major General Robert Neish said; “Digicel Foundation is a firm supporter of local culture and as such, we are delighted to have assisted the NDTC – this will ensure that great works of arts and literature done by Rex Nettleford and other stalwarts in the dance industry are preserved and serve as a reflection on our rich history for generations to come.”

Neish closed by saying: “Over the last four decades the National Dance Theatre Company has given tremendous focus to the dance industry – not only celebrating it for its rich history but also for preserving its intricate movements and refreshing realities – which reflects the vitality of the Jamaican people.”

As a token of appreciation, the NTDC handed over an autobiography of the late Rex Nettleford to the Digicel Foundation team. Nettleford had been one of the pioneers who have inspired positive change in the Jamaican entertainment industry – particularly dance – and to be included in the newly-refurbished and renovated offices are some of the works of the former university professor and Vice Chancellor.

Established almost five decades ago, the NTDC has distinguished itself as a solid manufacturer of bona fide talents in the local dance landscape transcending regional and international borders with classical theatre dance arts.