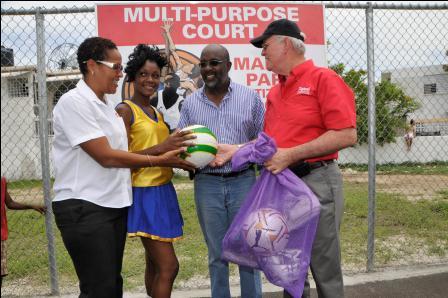 Located in Portmore, St. Catherine, the Marine Park Multi-purpose Court was being used by over 2,000 residents of the immediate community well as approximately 10,000 residents from adjoining communities for their sporting activities.

At times, the young ladies from Marine Park would travel to other communities such as Naggo Head and Braeton for their netball practice, which was stopped after a while as parents became concerned for the safety of the girls.

Out of the need to provide the community with a proper Multi-purpose court, the Marine Park Citizen’s Association applied to the Digicel Foundation for assistance. This was granted to the tune of JA$2.9M to refurbish the existing court and construct a much needed perimeter fencing around the court.

After conducting a 2-month construction of the multi-purpose court in Marine Park, Portmore and outfitting it with perimeter fencing, the Digicel Foundation handed over the court to the Marine Park Citizens’ Association in Portmore on Saturday, June 25th at 10am.

The property spans 6-acres and also facilitates walking and jogging exercises daily, particularly by the senior citizens in the community.