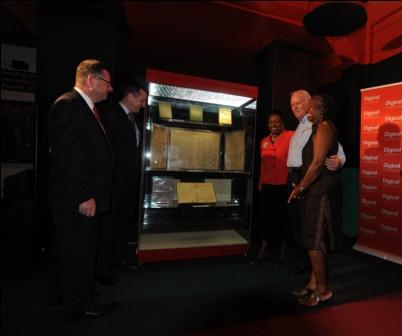 Liberty Hall, founded in 1923 was the headquarters for the Kingston Division of the UNIA. Each UNIA division across the world was required to assist in fulfilling economic and cultural need of black communities, as well as to serve as administrative centres of the UNIA. The property was restored by the Ministry of Education, Youth and Culture through the Institute of Jamaica, the Jamaica National Heritage Trust and the Friends of Liberty Hall.

The primary mission of Liberty Hall is to inform the public about the work of Jamaica’s first National Hero, Marcus Mosiah Garvey, and to use his philosophy and opinions to inspire, excite and positively affect the self-identity of Jamaican people, while creating social and economic wealth.

This year, in recognition of International Museum Day, Liberty Hall rolled out the ‘red carpet’ to host a Wine and Cheese Evening and a Media Tour at the museum for a mix of museum enthusiasts, media and members of corporate Jamaica.

One of the main highlights during the event was the unveiling of a state-of-the-art airtight museum display case which was donated to the museum by the Digicel Foundation.

According to Donna McFarlane, Director/Curator at Liberty Hall, “As we celebrate International Museum Day, we reinforce the importance of telling our own story from our perspective. The Marcus Mosiah Garvey Multimedia Museum is an important example of the future of Jamaica’s museums and we salute Digicel for its support of this initiative. This well needed display case is very important to us at Liberty Hall as it means we can now house and preserve the artifacts and writings of the late Marcus Mosiah Garvey to this generation, the next generation and generations to come – thank you Digicel Foundation.”

In the meantime, Major General Robert Neish closed by expressing that, “The Digicel Foundation fully understands the importance of preserving Jamaica’s rich culture, heritage and our legacy and to that end, we remain committed to supporting initiatives that meet these objectives.

The freestanding case was built by Helmut Guenschel in Baltimore and is the only one of its kind in Jamaica and the Caribbean to date.