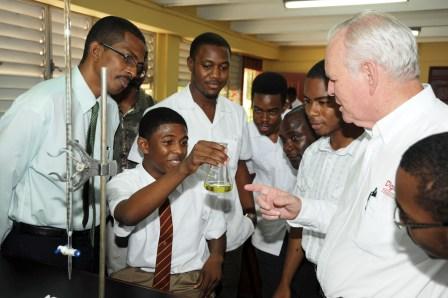 Three Science Labs renovated courtesy of Digicel Foundation Kingston, Jamaica – 21st October 2010:  The Wolmer’s Boys’ School in Kingston proudly reopened three newly renovated Science Laboratories, courtesy of Digicel Foundation on October 21, 2010. A project initiated by their forward-thinking Parent Teachers Association (PTA), the school body is happy to see their 70-year-old laboratories renovated. “We are happy that we are one step closer to getting our entire Science facility in top shape,” commented Dr. Walton Small, Principal of Wolmer’s Boys School. “We must say a big thank you to Digicel Foundation for their outstanding contribution to our school and by extension, to education in Jamaica. I know our teachers and students will take full advantage of this significant donation as they work and prepare hard for their examinations.” “Digicel Foundation remains firmly committed to supporting education and assisting our schools with reaching and attaining their academic goals,” expressed Major General Robert Neish, Executive Director of Digicel Foundation. “With that said we anticipate great news from the Wolmer’s Boys School in the years to come as they work with renewed effort and drive to continue achieving their best.” The Wolmer’s Boys’ School is renowned as the oldest school in the West Indies, having been founded on May 21, 1729. Since then, they have consistently built their school on the motto – ‘Age Quod Agis’ (Whatever you do, do it to your best). “Prior to the refurbishing of the Laboratories, the students and teachers felt that the workspace was uncomfortable, out-dated and non-conducive to the teaching-learning process,” commented Dr. Small. “Many of the cupboards, workbenches and stools were either falling apart or damaged beyond use and this left limited space for work to take place.” The school approached Digicel Foundation to have three Laboratories renovated to accommodate their present student population, which has quadrupled since the Labs were built. “Performances in the Science areas at the CSEC and CAPE levels continue to be one of excellence but our aim each year is always to be the best and to reach the 100% pass rate for all subjects. We are confident that with improved Lab rooms we are able to get closer to that target.” In 2009, Digicel Foundation reopened a newly refurbished Science Lab Block at the Excelsior High School in St. Andrew, which was in a serious state of disrepair. Major General Neish shared that, “We recently learnt that Excelsior received 100% passes in Biology at the CAPE level. Work is also well underway to boost the Science Labs at Jamaica College in our continued effort to make a significant and positive impact on education at all levels across Jamaica. .”