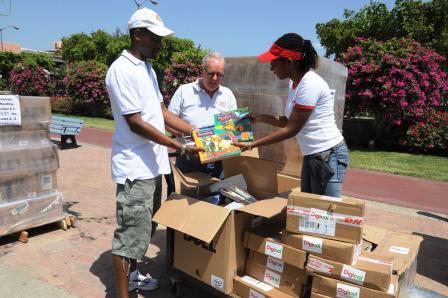 Digicel Foundation joins the Race to Literacy
Over 15,000 Books donated to Charity

Kingston, Jamaica – 30 April 2010: On May 2, 2010, Digicel Foundation will officially make its contribution to the Rotary Club of Kingston, at the Emancipation Park, to assist with their attempt to break the Guinness World Book Record for “Most Books Donated to a Charity in Seven Days”.  “Digicel Foundation is involved with this particular initiative because we have a general commitment to Education and so we could not pass up this opportunity to support such an impactful venture,” commented Major General Robert Neish, Executive Director of Digicel Foundation.
Digicel Foundation purchased almost 16,000 French Creole books for this initiative. After being counted on Sunday, May 2, these books will be given to our sister Foundation in Haiti. “In view of the fact that Haiti has been devastated by the January 12 earthquake, Digicel Foundation Jamaica, in association with Digicel Foundation Haiti, wanted to reactivate learning in the schools where the children lives have been so affected in and around Port-au-Prince,” Major General Neish expressed.
Digicel staff members could not be left out, as an internal book drive, saw them taking in books that will be donated to the Jamaica Library Service, through the Rotary. “Digicel Foundation is firmly committed to playing our part in ensuring that illiteracy is eradicated from our shores in the shortest time possible,” Neish explained.

Come join us on May 2, 2010, at the Emancipation Park, as Digicel Foundation donates books to a worthy cause and hopes to generate interest in literacy in Jamaica. Digicel will be providing fun and wholesome activities for the children and a free concert will be staged in the afternoon.