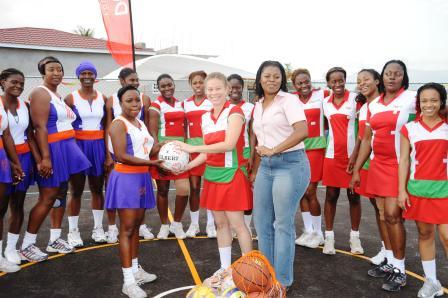 Kingston, Jamaica – 09 April 2010: To commemorate the opening of the newly constructed multi-purpose court at the Leiba Gardens Community Complex in Spanish Town, the Digi-girlz have been challenged to a friendly netball match by the home team. Captain of the Leiba Gardens netball team, Anna-Kaye Planter expressed her delight for the newly constructed multi-purpose court that Digicel Foundation has sponsored.
“It feels great to actually have our own court in our community. We have a very good team, they practice very hard and having a Court that is easily accessible will make it even better for us to prepare for competitions”.

In January of this year, the Digicel Foundation’s Board of Directors approved JA$2.5 million for the construction of the Leiba Gardens multi-purpose court. “The Board was impressed with the team’s commitment to the sport over the years and their achievements even without having a resident facility for training”, shared Eleen Rankine, Administrator of Digicel Foundation. “It was also great to see that with a strong management structure within the community, they were able to contribute their own sweat equity to the project,” she added.


The twelve member Digicel team work in various departments within the telecommunications company – Human Resources, Customer Care, Finance and their Group office. Althea Grandison, speaking on behalf of the team commented on the impending match, “The Digicel netball team is happy to be participating in Digicel Foundation’s handover of this court to the Leiba Gardens community and giving back through a sport we love and enjoy. We’ve heard that the Leiba Gardens team has been training very hard, so are also looking forward to an exciting friendly match.

Over the past 12 years, The Leiba Gardens Citizen’s Association has developed an active netball team that comprises of approximately 24 members. The team has participated in various netball leagues, such as the Jamaica Netball Association league and last year’s staging of the Sharon Hay-Webster league where the team was placed 2nd. Training for these games means that for the past three years, the team has had to journey to the Spanish Town Police Station two days per week to use the facilities at the Spanish Town multi-purpose court for practice sessions. According to Vernon Duncan, Secretary and PRO of the Leiba Gardens Citizens’ Association, “The community is very excited about having their own court. This means we are now able to increase training and other young people from the community can develop their skills in volleyball, netball and other sports”.