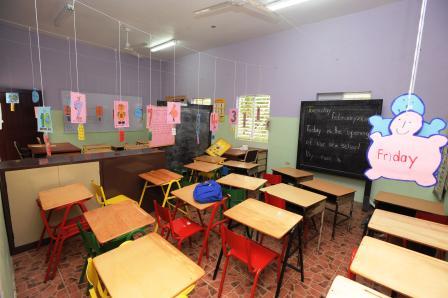 Kingston, Jamaica – 22 February 2010: After waiting five long years for the completion of their School Expansion Project, the toddlers of the Tiny Tots Basic School in Lacovia, St. Elizabeth can now learn comfortably in their new facility. This was due to the joining of hands and hearts between the Digicel Foundation and the The CHASE Fund, who came to the schools rescue with J$7.5 million each.
“The need for the expansion was quite grave as the school was overcrowded, holding all three classes in a one room building; the bathroom facility was in a deplorable condition and the student population just kept growing,” commented the Principal, Sonia Vassell. “Right now we have on roll over 100 students and if we didn’t have the expansion, I don’t know where we would put all these kids.”
Sandra Brown, a member of the church, under which the school operates and who also pushed forward the application to both the Digicel Foundation and the CHASE Fund, was quite elated and breathed a sigh of relief as she opened the doors to the various sections of the new school. “We have been praying for this for a long time and through all the thistles, we have finally reached the goal; and the children are so happy,” as she gave the Project Overview at the official opening of the school.
“The road to success is truly a hard but gratifying one,” commented Eleen Rankine, Administrator of the Digicel Foundation. “Our partnership with The CHASE Fund has been a real eye-opening experience, as we had to appreciate the various regulations that govern them. Though this has been one of our longer projects on the books, we have learnt a lot working with CHASE as well as built a strong relationship with the Barton Wharf Community.”