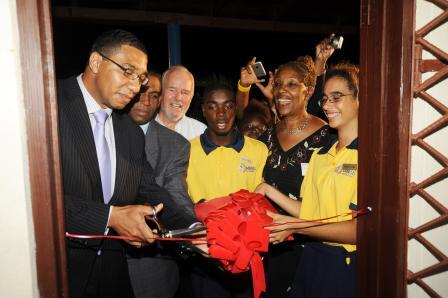 Relocation and Renovated Project now complete   Kingston, Jamaica – 18 November 2009: With assistance from the Digicel Foundation, Genesis Academy has completed its relocation and renovation project. Now situated at 38 South Camp Road, Kingston 4, the school specializes in teaching students with intellectual disabilities. At its new location, the school can accommodate more students and activities as it had outgrew its previous location.
“In Jamaica, we tend to leave persons with learning disabilities behind and in reality, without this school, 50 students would have had nowhere to go in September, when the school re-opened,” explained a passionate David Hall, past CEO of Digicel Jamaica.
The Digicel Foundation donated $10 million towards phase one of the project seeing the completion of the administrative rooms, six classrooms, kitchen, library, sick bay and bathroom facilities. The school’s management team worked assiduously, making the school ready for classes on Monday, September 7, 2009. “The Digicel Foundation is delighted to be involved with the Academy as it is an important education facility for children with learning disabilities, allowing them to reach their full potential,” commented Major General Robert Neish, Executive Director of Digicel Foundation.
In existence since 2005, Genesis Academy caters to students from twelve to twenty-one years of age and is described by its founders as a school of excellence for students with special needs and disabilities. It seeks to offer a comprehensive curriculum with a mixture of academic subjects and work experience opportunities, tailored for students with special needs. The school endeavours to prepare its students for the opportunities, responsibilities and experiences of adult life.
The Digicel Foundation first got involved with Genesis Academy when part proceeds from the Digicel’s Fame and Fortune show, in 2007, was donated to the school. David Hall, then CEO of Digicel Jamaica, was very excited in assisting the institution further. It was pointed out that the lease on the Barbican property expired in June 2009 and the owner indicated that there were alternative plans for the premises and grounds. Digicel Foundation facilitated the discussions which led to the school securing the premises on South Camp Road, on a 25 years lease, at a peppercorn rental.  “We are happy to see them in their new expanded location, which now includes a skill training element,” said Major General Neish.
The school has also completed phase two of this project, through multiple donors including the CHASE Fund, which has indeed made the institution a world-class one. This phase saw the development of their skills and vocation block where students participate in needlework, jewelry-making, cosmetology, food and nutrition, data processing etc. “We want them to have the opportunity to earn a livelihood when they leave the school,” commented Donna Lowe, project manager, teacher and past parent of Genesis Academy. “My son graduated last year and he is now happily working. I don’t know what he would be doing now if he hadn’t attended this school,” she also expressed.
The auditorium or multi-purpose room, as well as the occupational therapy rooms, have also been completed.