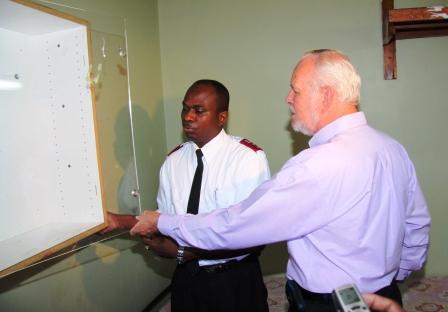 Kingston, Jamaica – 11 November 2009: On Wednesday, November 11, 2009, members of the Salvation Army guided a tour of their newly renovated and upgraded facilities at their Peter’s Lane location, in Downtown Kingston. Board Directors of the Digicel Foundation and members of the press were on-hand to see the finished product of hard work and dedication, totalling $1.3 million.

Lieutenant Colonel Sydney McKenzie, Property Manager of The Salvation Army, spoke of the disrepair of the building, prior to the start of the project; “quite a number of rooms were closed and the entire upstairs of the building was unusable.”

Twenty-five bedrooms and five bathrooms have been renovated at the Centre to facilitate individuals in the Rehabilitation Programme, homeless men, and persons who are simply in need of somewhere to stay the night. The Salvation Army undertakes other activities such as the Men’s Hostel, the Feeding Programme (500 hot meals served) and three thrift shops across the island.

The accommodations will also serve drug- or alcohol-addicted men who are ready to begin the long and arduous journey to recovery. “The Salvation Army is happy to have worked with Digicel Foundation on this project as it is one of our most influential projects. This Centre speaks to Digicel’s social corporate responsibility becoming tangible and impacting the lives of people who really need it,” asserted John Williamson, Development Director of the Salvation Army.

The Rehabilitation Programme offered at the Salvation Army is a three phase process. The first phase consists of the Outpatient Treatment, where the person applies for admittance to the Programme. “He (the individual) comes into the programme for both individual and group therapy sessions and this may take a few months, as there is a waiting list to get into the Programme,” explained Mr. Williamson.

Once a space becomes available, the person may be selected to enter into the Residential phase of the Programme, which runs for 24 weeks,” Mr. Williamson shared. “Within this phase, there are six graduate levels, each running for four weeks – consisting of addressing behavioural issues, work ethics, spiritual development and class participation,” he also said.

“The final phase is the Graduation Phase, lasting three to six months, where the person is now considered to be finished with the Rehabilitation Programme. However, the Salvation Army continues to offer assistance regarding the individual’s well-being and so work opportunities are found and given to the individual, where he is no longer a patient but an employee,” he said. “This is all in an effort to reintegrate the individual back into society.” The individual may also opt to participate in their Narcotics Anonymous Programme for up to twelve months after leaving the Rehabilitation Programme; but this is optional.

Executive Director of Digicel Foundation, Major General Robert Neish spoke of the atypical nature of this project but it was one that the Foundation could not pass up. “This renovation of the William Chamberlain Rehabilitation Centre is outside of the Foundation’s broad scope of work, but every now and then, a project like this comes along that is worthwhile and genuinely fulfils the needs of those it aims to touch,” he said.

Lieutenant Colonel McKenzie wrapped up the tour, by committing to oversee the upkeep of the property. “It is my intention to facilitate the proper maintenance of the building, to ensure that it is suitable to carry out the purpose that we intend it to.”