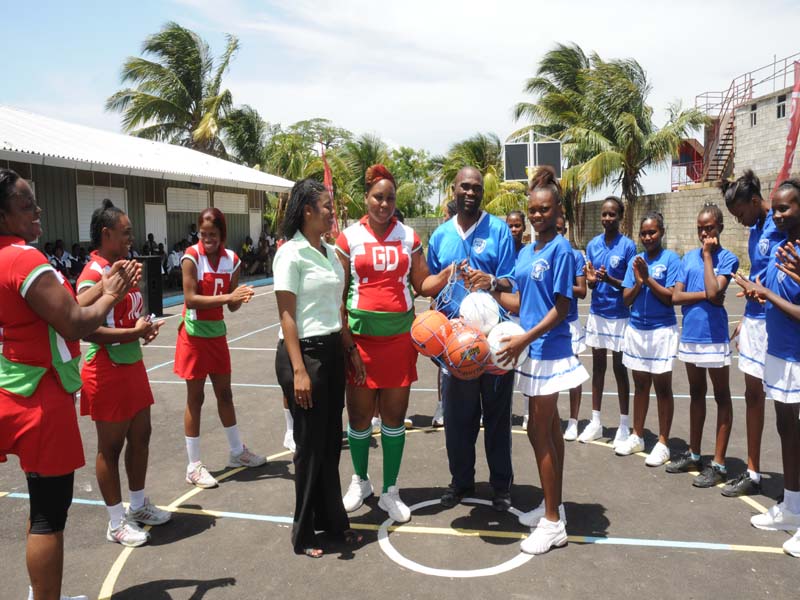 On Friday June 5 a new Multi-Purpose court was handed over to the Braeton Primary and Junior High School in Portmore, which is expected to further enhance the school’s performance in the Junior High School under 15 Netball Competition. Executive Director of Digicel Foundation, Major General Robert Neish, noted that the facilities were built to assist Braeton Primary and Junior High school based on their outstanding performance in the Under 15 Netball Competition and their urgent need for a sporting complex.

Ms. Cameal Beckford, Teacher at Braeton Primary and Junior High School and Project Manager of the multipurpose court explained that the school was in dire need of a sporting facility. “The Braeton Primary School students have been operating without any sporting facilities for a while and it is like a blessing to have Digicel Foundation come on board and build a multipurpose court for us.”

Braeton Primary and Junior entered the under 15 Netball competition in 2006 and was placed second in the finals. In under a year, the school claimed the top spot in the competition in 2007. “It is interesting to see that Braeton Primary and Junior High has made so much progress without having any facilities necessary for the athletes to train. We are happy that we have come on board and we hope that this Multi-Purpose Court will not only continue to enhance school’s performance in netball, but it will also help to build community spirit and interaction among students at the school,” noted Administrator of Digicel Foundation, Eleen Rankine.

The court will be used for a variety of sporting activities such as netball, volleyball and basketball. Ms. Beckford further noted that with the new facilities, the sports department expects to start a community volleyball league to stimulate and engage people’s interest in volleyball. ”Volleyball is not really a popular sports in Jamaica and we intend to get more people interested in the sports and possibly help to uplift the community spirits in and around the area,” added Ms. Beckford.

In his address to the students, Member of Parliament for the Portmore division, Mr. Fitz Jackson advised the Braeton Primary and Junior High school community to be good custodians of the Multi-Purpose Court and continue playing fiercely, honestly and fairly in the sporting events they take part in.

In addition to sporting facility benefiting the Braeton Primary and Junior High school, other schools will benefit – the facilities will be used to host netball, volleyball and basketball competitions taking place in the Kingston and St. Catherine region. The Multi-Purpose Court will also be rented on a regular basis for the hosting of community events as an additional source income to be used towards the maintenance and upkeep of the sporting facilities.