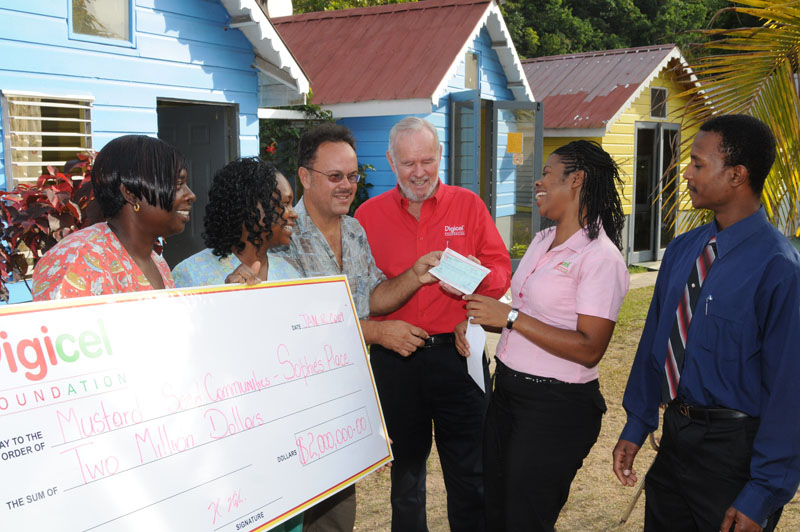 Kingston, Jamaica – 14 January 2009: On Monday, January 14, Sophie’s Place, a Mustard Seed Communities’ Home was presented with a cheque of $2M by the Digicel Foundation to assist with damage caused by Gustav.

The home, located in Gordon Town, Papine, provides shelter and support to over thirteen physically challenged children, was badly hit by Tropical Storm Gustav in August 2008 claiming one of its housing units that was used to accommodate volunteers at the facility. Surrounding structures that protected the facility from the Hope River were also damaged by the high flood waters

Executive Director at Digicel Foundation, Major General Robert Neish, said that the Foundation is pleased to see Sophie’s Place taking a strategic approach to the future.”In this harsh economic climate more and more companies are forced to give less and less because of financial setbacks. So it is important that the management team at Sophie’s Place has decided to erect a temporary retreat housing unit that will generate income for the child care facility.”

Claiming the $2M cheque one of the caregivers at Sophie’s place, Angelee Brown, reminisced on the night of tropical storm Gustav, water reached their waists and they had to relocate all their children to the upstairs section of one of the building. Now Sophie’s Place in unison with the Gordon Town Community has embarked on a disaster preparedness plan to clean the Hope River bed and keep it free from all debris that would result in flooding. The National Works Agency (NWA) is also working to redirect the course of the Hope River and help reduce flooding in the Gordon Town community and other surrounding areas.

Sophie’s Place is one of several homes funded by the Mustard Seed Communities headed by Father Gregory Ramkisoon. It particularly caters to the needs of children who are disabled and neglected by society.